Despite its reputation for progressive policies such as sanctuary city status and a ban on assault weapons, Boulder’s budget includes a policy considered one of the most punishing to the poor: A grocery tax.

Charging sales tax on something people need to live is inherently regressive, opponents of such policies argue. Sales tax can add hundreds of dollars to the bills of families already living on unfathomably little. Taxing groceries event at modest rates increases the risk of food insecurity, according to a 2017 paper authored by a professor of agricultural economics and rural sociology at Auburn University.

Recognizing this, Boulder has for more than 50 years offered rebates for low-income families, seniors and residents with disabilities. However, data suggests they are vastly under-utilized by the populations that would benefit most, with fewer than 1,000 residents receiving little more than $100,000 in aid this year.

The conversation about grocery tax isn’t widespread in Boulder. Only one of the 15 candidates for city council proposed eliminating them: Benita Duran, although another, Mark McIntyre, did discuss at length the need to “move away from a reliance on sales tax” to fill Boulder’s coffers.

McIntyre and Duran failed to win seats on the council, finishing seventh and ninth, respectively. None of the current council has proposed broad changes in tax policy along these lines, though focusing city decisions through an equity lens is a frequent topic of discussion.

If the city were to do away with its tax on items bought at a food store, it would be in good company, joining 30-plus states — including Colorado — numerous cities and the vast majority of U.S. counties that exempt groceries from sales tax. But Boulder would also be forfeiting millions of dollars at a time of great concern over falling revenue.

Between 2015 and 2019, Boulder issued 4,457 total rebates for grocery sales tax, according to notes sent to city council ahead of Tuesday’s meeting. Qualifying residents are those over 62, families with children or persons with disabilities earning less than 50% of the Area Median Income.

Families with children are eligible for $260 annually; seniors and the disabled can receive an $85 yearly rebate. In 2019, 937 rebates were given out.

To date since 2010, 8,693 rebates have been issued for a total of $910,424. More seniors have begun to claim the rebates over time, though the number of qualified families with children and disabled residents who apply has fluctuated, settling below 2010 levels. 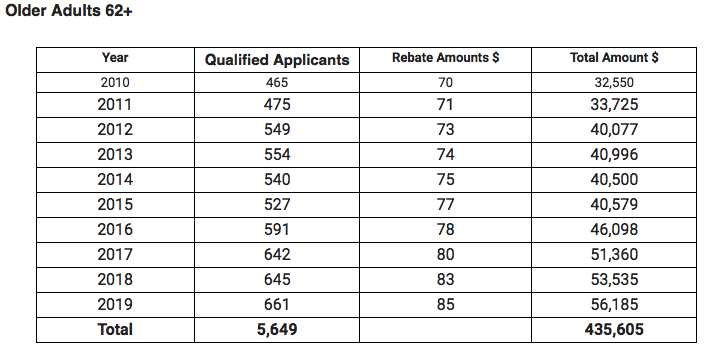 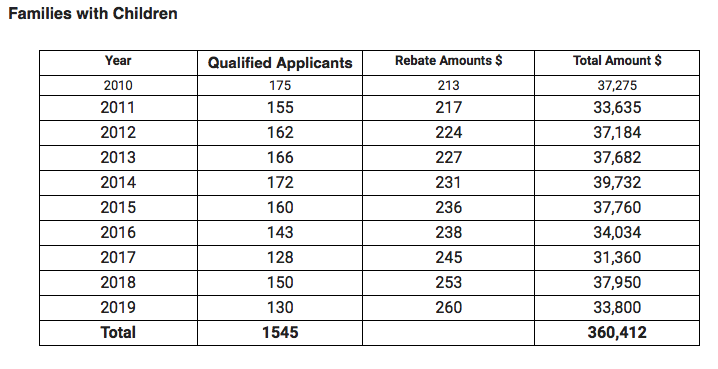 On average, fewer than 900 residents have received rebates each year of the past decade.

These are likely just a fraction of those eligible. How many Boulderites might qualify is difficult to ascertain, yet Census data suggests that more than 1,000 families with children are below the federal poverty line, along with 700-plus residents over 65. That exceeds the total number of rebates awarded in 2019, and the poverty line is far below the qualifying income set by the city for the rebates.

More than 3,200 families with children in Boulder earn below $50,000, slightly below the limit for a family of four, according to Census data. That’s more than three times the amount of rebates given out in 2019. However, the size of those households is unspecified, so there’s no way to know how many would qualify for cash back.

The last time the city conducted an analysis on potential eligibility was in 2015. That year, roughly 9,792 households were eligible for rebates — more than ten times the 828 who applied.

“If all households who were eligible applied, the rebate distribution would have been $994,928,” Kristin Hyser, deputy director of housing and human services, wrote in an emailed response to council questions. Yet even that 9,792 estimate is low, “due to lacking information about residency and disability,” Hyser wrote.

City council on Tuesday will consider slight tweaks to the rebate program to expand access and bring the language more in line with modern thought. For example, the definition of head of household will be altered to include single parents who many not have legal custody of children but still have financial responsibility for them.

The criteria for disability is currently defined as someone who is receiving a Social Security disability income from the federal government. However, best current practice finds that as not a true measure of disability. Instead, Boulder will allow anyone with a disability as certified by a doctor in accordance with Americans with Disabilities Act guidelines to be eligible for grocery tax rebates.

New documentation requirements are also being adopted for persons experiencing homelessness to access the rebates. Typically, permanent addresses are required to prove that residents live in the city and are therefore eligible — a challenge for the unhoused. Boulder will accept as proof of residency documents from an area agency serving the unsheltered to prove they work and shop in the city.

The city consulted local nonprofits Mental Health Partners, Boulder Shelter for the Homeless, Boulder County Area Agency on Aging in proposing the changes, which will go into affect next year. As a result, the rebate amount could increase slightly, according to city staff.

Costs of rebate vs. tax exemption

The costs to administer these rebates is unclear. In the past, during a May discussion over possible vehicle fees, city staff testified that rebates are sometimes prohibitively expensive. No information on administrative costs were included in the council packet.

However much it costs to hand cash back to a thousand residents, it’s likely to be a fraction of what it will cost Boulder to do away with grocery sales tax altogether. Last year, the city brought in more than $16.7 million in sales tax revenue from food stores — nearly 12% of all city sales and use tax collected, according to sales tax revenue reports. Close to $12 million has been collected through September of this year, roughly 8% of this year’s $145,235,404 general fund budget.

That steady cash flow is why many municipalities can be reluctant to craft exemptions for equity’s sake. A bill introduced in Arizona earlier this year would overturn city grocery taxes; most of the state’s 91 municipalities collect the tax. The League of Arizona Cities and Towns came out in opposition to the proposal, arguing it would decimate local budgets.

Furthermore, some of Boulder’s debt is tied to its sales tax collection, Chief Financial Officer Cheryl Patelli testified Dec 10. Bonds issued and active through at least 2038 are based on current taxes; eliminating an entire category could affect the city’s bond rating.

Exemptions are not uncommon. Arizona’s three largest cities, for example, don’t charge food tax. Neither does Denver. Fort Collins charges a reduced rate for grocery store food, as do a dozen states. Fully 2/3 of U.S. counties don’t tax food, according to the aforementioned paper on sales tax and food insecurity.

But $16 million would be a significant chunk of change for Boulder to give up, particularly as the city is facing millions in unfunded needs and projects. A tax extension to fund open space was passed overwhelmingly by voters this month — which, as a sales tax, will continue to be levied on grocery purchases — but affordable housing, the library, police, fire and other essential city services remain underfunded.

Any tax policy change would be undertaken as part of budget discussions, which begin in the spring; such a large undertaking would likely last for a year or more to allow for adequate public input. City council will set their agenda for the next two years at its mid-January retreat.

For now, the simpler course may be to work on expansion and better utilization of the rebate program. Boulder hopes to use an online eligibility portal, under development now in a partnership with Google, to better inform residents about what programs, discounts and rebates they qualify for.

Council on Tuesday will consider minor changes to the food ta rebate program. On the consent agendaThe grouping of routine items on the city council meeting agenda (e.g. approval of past meeting minu..., it is not scheduled as a discussion item nor is there opportunity for public comment.

Author’s note: This article has been updated with comments from Boulder’s chief financial and budget officers clarifying the role and amount of the city’s food tax, and additional information from Housing and Human Services.