Boulder’s elected officials on Tuesday unanimously passed a measure committing itself to racial equity efforts, even as members of the public asked for more process and greater accountability. While some council members acknowledged the need for measurable goals and action steps, they argued that the resolution itself was more about intent than action.

“This is one of many resolutions in this space I anticipate council will pass,” said Aimee Kane, program and project manager.

Some tweaks were made that acknowledged community concerns, including the first line of the resolution that references the city’s location on indigenous lands: Boulder’s “beautiful natural surroundings were originally the home of the Southern Arapaho, Cheyenne and several other tribes,” it read.

“That’s written in past tense,” Carrie Miller said. “That’s also present tense. It’s still stolen land no matter how comfortable you are on it.”

Council also specified that members’ attendance at various trainings will be made public, at the urging of councilwoman Rachel Friend. (Aaron Brockett, Young and Mayor Weaver also made statements of support for this change.) A recurring complaint of the public is that it is unknown which members of council have already participated in training offered by the Government Alliance on Race & Equity, which the city contracted to head its efforts.

Roughly 30 trainings will be offered to council and staff over the next three months, according to Kane. But most or all of them are scheduled for weekdays, she said, sparking worry among some on council.

“Several council members have day jobs,” said councilman Bob Yates, who is retired. “I don’t want someone to be called out because they had to work.”

“If (trainings) could be held during council meetings, that would be great,” added councilwoman Mirabai Nagle. “There are some of us who work seven days a week.” 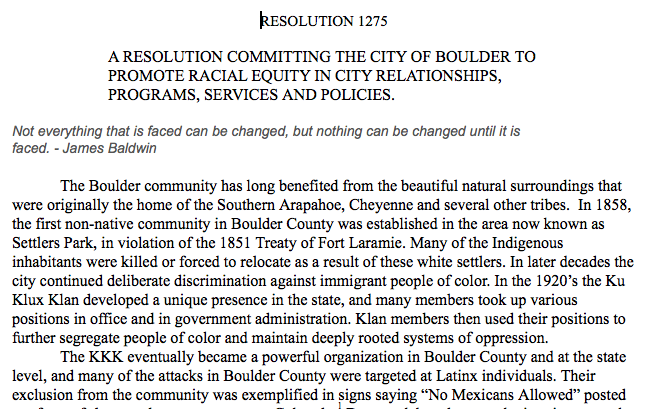 It was Nagle who caused the adoption of the resolution to be accelerated. Her comments on white privilege at the first meeting of the current council drew much criticism and a fair amount of defense as well.

Claudia Hanson-Thiem thanked councilwoman Young for expediting the process. But she said the work was too important to rush.

“I don’t think a hasty signing is an effective, responsible or respectful response to structural racism and its impacts in our community,” said Thiem. “Please don’t sign this to feel good about it and be done with it.”

“It’s not enough to simply direct staff to use an equity lens and anticipate more resolutions in the future. At a minimum we need some way to measure our progress. … It is important to act with urgency here, but I’d also ask that you listen to members of the community who deserve depth, sincerity and accountability from the process.”

Other speakers echoed Thiem’s requests and added their own, including measurable goals; a comprehensive audit of all city processes, policies and contracts; mandatory and continual training for council and staff; specific outreach efforts to the Latinx, LGBTQI and communities of color; and for council members to complete training before signing the resolution.

“Council needs to do a full diversity and inclusion training so they understand what they’re signing,” said Brook Stableford. “Otherwise, it’s not in good faith.”

Metrics and goals will be developed through a public process, Kane and council members said; that’s why they weren’t included in the resolution (though a draft plan was provided in notes to council).

“The resolution is a step in a long journey,” councilman Brockett said. “It’s expressing council’s intent to do the work moving forward.” The next steps are “where the action happens.”

Councilwoman Friend pushed for a pause, noting that conflicting events may have kept residents from attending. Chambers were fairly full, though less than at previous meetings that included discussions over race and equity.

“Maybe we should slow down,” Friend said. “I’m still unclear on why tonight has to be the night.”

Councilwoman Young made an abrupt mid-discussion motionFormal proposal calling for a vote to put the ordinanceA piece of municipal (city-level) legislation. to a vote, though other council members still had questions, comments and suggestions. Plenty of community members supported immediate adoption, she noted.

Human Relations Commission Chair Nikhil Mankekar, Boulder Chamber President John Tayer and Community Foundation CEO Jeff Hirota, were among those who spoke in favor during the public hearingScheduled time allocated for the public to testify or share commentary/input on a particular ordinan....

Junie Joseph, though seemingly compelled by Friend’s arguments at first, later said the resolution was a good “skeleton” for Boulder to build on.

“Tonight is a great night to move forward,” Joseph said. She extended an invite to those demanding accountability of council: “In the future, come, hold us accountable.”