The preferred plan for a dam, detention pond and floodwall at U.S. 36 in South Boulder  may not be feasible, according to the results of a months-long analysis by city staff — and not because the University of Colorado is still on the fence about the design.

Variant 1 500-year, as the design is called, may not be workable from an engineering standpoint, staff said in notes to council ahead of a Tuesday study sessionA council meeting where members deep-dive into topics of community interest and city staff present r.... Protection from a smaller storm may be the only option; that is, if elected officials can stomach the idea of a south campus sans student housing.

Staff and consultants have been working since July to find a path forward that would provide flood protection for thousands of downstream residents and preserve enough buildable land for CU’s eventual southern campus. The university has insisted on 129 acres, the amount zoned for development in the 2015-2017 land use designation process.

They came up with three: The initial Variant 1 selected by the previous council in August 2018, to protect against a 500-year storm; a different version of Variant 1, for a smaller, 100-year flood; and a middle option, referred to as Variant 1, 200-year.

The analysis was not kind to Variant 1 500-year. It is by far the most costly, with the most environmental impacts. And a basic requirement of any flood mitigation, maintaining flow rates under U.S. 36, may not be met, staff wrote:

“The feasibility of the 500-year option may be questionable considering the combination of financial implications, environmental impacts and engineering considerations.”

Variant 1, 500-year
76 acres of fill needed + OSO land
Cost: $96 million ($47M flood mitigation; $34M fill; $15M CU impacts)
Floodwall length: 2,810 ft
Floodwall height: 10.6 ft
Environmental Impacts: 9.7 acres of wetlands (7.1) and open water (2.6) and 5 acres of habitat for endangered and threatened species
Most impacts to Preble’s mouse habitat
Unclear if flows under 36 bridge can be maintained; “Hydraulic modeling work to date has not been able to establish acceptable flow conditions at the US36 bridge at South Boulder Creek for Option 2, which puts the feasibility of this option in question.” Additional analysis needed

It is the smallest storm design, Variant 1 100-year, that emerged from the analysis as perhaps the best option. It’s the most cost effective, impacts the fewest acres for sensitive natural habitat and was originally on CU’s shortlist of acceptable options.

The latter benefit may no longer apply. University officials last month sent a letter that Variant 1 in any form might compromise CU’s ability or desire to build housing on the site. It was a startling shift in position: housing is cemented in the guiding principles developed jointly by Boulder and the college for the project.

“Housing will be the predominant use of the site for areas not used for flood mitigation (i.e., with a target of 1,100 residential units and the final number guided by transportation performance and other site constraints), although the site may include a mix of residential and non-residential and facilities,” the document reads. “The site will emphasize housing units over nonresidential space (jobs) to help balance jobs and housing in the community. … Housing on the site will meet the needs of university faculty, staff and non-freshmen students in order to address the fact that Boulder housing is currently unaffordable to faculty, staff and students.”

Tthe guiding principles also state that any dwellings should be “integrated” with the community “rather than built as isolated enclaves.” CU’s principal objection is that an earthen dam will bisect the property; any housing would be built behind it.

The location of the earthen dam does not appear to have changed from earlier iterations of the design, so the reason(s) for the reversal remain unclear. CU’s Frances Draper did not respond to a request for comment Friday. It is still unknown if the university will present at the upcoming study session, staff wrote in notes to council.

It will be up to council to decide if the benefits of annexation — free land for flood mitigation, the ability to control development, etc. — are worth approval without the guarantee of housing, staff wrote.

There may be a way to salvage the plan by shifting site access, council members said at an early February meeting. (The university, too, in its letter wrote that concerns “can be successfully worked through.”) But Boulder’s leaders mostly honed in on a possible land swap in the Area III Planning Reserve north of the city, something CU has opposed in the past.

“In our estimation,” university officials wrote in a May 20, 2019, response to city suggestions, “there is no reasonably proximate, developable and comparable land available which can be offered by the city in exchange. The suggested property in Planning Reserve III north of the city is not proximate, not comparable, not developable and not currently annexable under the (Boulder Valley Comprehensive Plan).”

Council has signaled its intent to kickstart the annexation process in time for a 2025 BVCP update. The land will be available for development by 2026 or 2027, staff said during this discussions. CU has stated in the past that it wouldn’t begin development of its southern campus for several years.

A handful of activists spoke at Tuesday’s open commentDedicated time at the beginning of regular council meetings, where up to 20 members of the public ca... to argue against the land swap as an unnecessary delay to flood mitigation efforts and argue for the smaller storm design.

The 100-year design provides “significant” protection, said Laura Tyler of South Boulder Creek Action Group. “It exceeds what is happening in most of the city of Boulder and it’s doable.”

All options comply with city, state and federal standards, said Kathie Joyner, also of SBAC. “Move forward with the design that will be the fastest route to safety. … There is no perfect. While we look for it, people remain in harm’s way.” 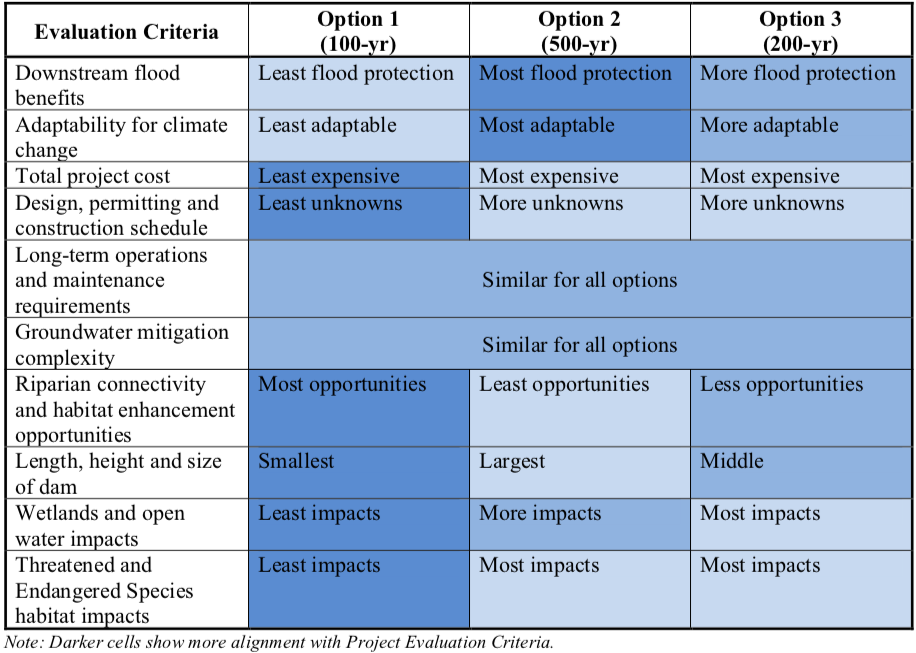 “Options 2 and 3 would represent a significant investment to remove homes from less vulnerable flood zones and would protect against storm events that statistically have a lower probability of occurring,” staff noted.

Whatever path forward is ultimately chosen, one last complication may remain. The floodwall along U.S. 36 will have to be built on Open Space. The Board of Trustees ruled that the project would require the land to be disposed, a formal process that involves OSBT, city council and — possibly — an election. A citizen petition could trigger a vote of the people on any disposal of open space, including transfer to another department.

City Attorney Tom Carr has testified that it is ultimately up to city council to decide if flood mitigation is an open space purpose, therefore negating the need for disposal. OSBT  argued that it isn’t a city charter open space purchase “to protect development.”

The previous council showed itself to be somewhat averse to Carr’s argument. It is as yet unclear how current members feel about disposal, as the issue has not been discussed.