A Colorado bill aimed at keeping police and firefighter radio traffic open to the public is being opposed by Boulder, one of several pieces of state legislation being actively monitored by city lobbyists. Council on Tuesday will consider an update to its legislative agenda, set in the fall.

A bipartisan pair of representatives, Republican Kevin Van Winkle, Highlands Ranch, and Democrat Jovan Melton, Aurora, are sponsporing HB20-1282, Radio Communications of Gov Entities.  It is the third piece of legislation in as many years attempting to counter the spread of law enforcement scanners going silent.

At least 30 agencies across Colorado have now encrypted their systems, according to Jeff Roberts, executive director of the Colorado Freedom of Information Coalition. This prevents the public and media from listening for important safety and crime information in real-time.

“News media is the first line of communication for the public,” Roberts said. “It has been for many years, to know what’s happening in your community right now, what questions to ask authorities, to help hold public servants accountable for how they respond to incidents in their communities.” 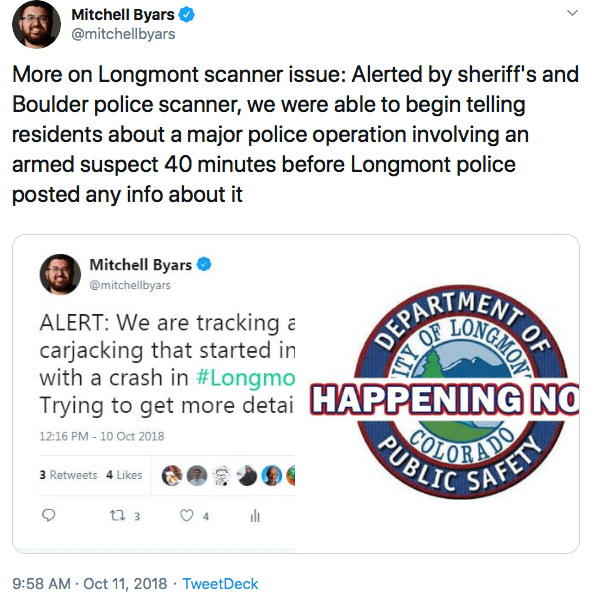 Journalists from around the state have raised the alarm about silent scanners interfering with their work. Denver Post reporter Noelle Phillips in August 2019 tweeted that a minor was shot and killed the previous month; without scanner traffic, it took weeks for police to report it. The Tweet was included in CPR coverage of radio encryption.

News outlets have the option of purchasing encrypted scanners, for a hefty $4,000 to $5,000, but access is still contingent on agreements with law enforcement agencies. In Denver, no media have been willing to sign on due to stipulations on what can and can’t be shared. Denver PD’s contract including allowances for the department to examine records collected by media outlets. 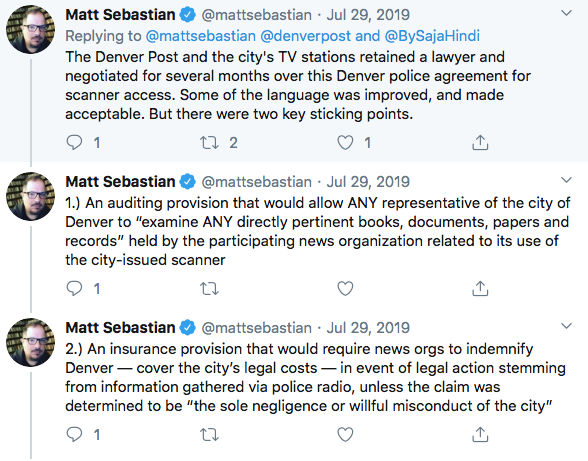 Law enforcement agencies argue that encryptions protects them and members of the public from criminals that might be listening in. Longmont police scanners went silent last year after a six-month pilot; 98% of officers surveyed during the program said they felt safer. There were five officer assaults during the encryption period, compared to nine for the previous six unencrypted months

In Boulder, police earlier this month “investigated” someone who was impersonating a cop and “pursuing a community member who would not stop for him,” according to departments spokesperson Dean Cunningham.

“The suspect had the police scanner app open and (was) actively listening to the Boulder Police channel,” Cunningham wrote in response to emailed questions. “This is just one example of criminals using the scanner to gather information about police movements and communication. The ability for criminals to know the exact location of police officers and what they are planning during a tactical situation unnecessarily places officers in harms (sic) way.”

Boulder PD hasn’t encrypted its radios yet, though it is being considered, Cunningham wrote. The department is also discussing ways to “include the media/public” if it encrypts, including a “single-channel radio” for media or a delayed online broadcast.

Furthermore, Cunningham wrote, “we push information out to the media regularly via press releases and social media prior to the media requesting information (and) we have the CAD call logs, blotter and online crime maps available to the public to keep them informed of what is happening in Boulder.”

If departments insist on encryption, Roberts said he ideal solution to preserve the public’s right to know would be to emulate Lincoln, Nebraska, which encrypted police and fire scanners last year. Media can still get real-time, unrestricted access; the public can access radio traffic online with a 10-minute delay.

News outlets and members of the public were invited to weigh in before radios were switched over, something Roberts hopes Boulder will consider should it continue down the encryption path.

This legislation differs from the previous two attempts in that it doesn’t seek to limit what communications can be encrypted, instead aiming to preserve access. It’s unclear if the current approach will be more successful; the legislation is scheduled for a hearing in the House Transportation and Local Government Committee on Wednesday at 1:30 p.m.

HB20-1282 is one of several bills Boulder is taking a position on this session. (Here’s a full list of active legislation.)

The issue of encryption has not been raised at council in the context of broader discussions surrounding police oversight and is not likely to be addressed Tuesday. The legislative update will focus on a dozen-plus bills in line with Boulder’s policy goals, such as pesticide and materials ban and protection for humble home residents.

There will be a public hearingScheduled time allocated for the public to testify or share commentary/input on a particular ordinan... associated with this topic. Members of the public who are interested in speaking can sign up until the hearing begins. This item is the second public hearing and will follow open commentDedicated time at the beginning of regular council meetings, where up to 20 members of the public ca... (typically takes 45 minutes to one hour), consent agendaThe grouping of routine items on the city council meeting agenda (e.g. approval of past meeting minu... (10 minutes or less, usually) and a scheduled 45-minute discussion on the Marijuana Licensing/Advisory Board.

Status: Scheduled for a second readingThe second opportunity for council to examine an ordinance, and when the public is invited to weigh ... in the House on March 3.

Provides homeowners an opportunity to work together to purchase their park by requiring notification of intent to sell to local municipalities and housing authorities and giving residents 90 days to make an offer.

Status: Scheduled for second reading in the House on March 2.

SB20-010, Repeal Ban on Local Government Regulations of Plastics
This would have allowed Boulder and other municipalities to ban plastics.

Status: Referred to House Finance Committee for a March 9 hearing with an amendmentChange made to existing documents, resolutions, or ordinances that removed polystyrene (generic Styrofoam) from the bill.

Status: Referred as amended to House Committee on Appropriations

Would protect bee and other pollinator populations by classifying specific neonicotinoid and sulfoximine insecticides as restricted-use pesticides, thus prohibiting their use by non- commercial applicators. Agriculture and public applicators are exempted.

Additionally, a bill to allow local control and regulation of pesticides is expected to be introduced.

Raises state tobacco and nicotine use to 21; would allow license to be suspended for those retailers who repeatedly sell to minors. Prohibits certain types of “flashy” advertising meant to appeal to youths.

Status: Scheduled for March 2 hearing in the House Finance Committee.

Status: Scheduled for March 4 hearing in the House Health and Insurance Committee

Additionally, 18 separate citizen initiatives on tobacco taxes have been filed with the state, according to staff notes. All of them require voter approval and would raise money to fund prevention and cessation efforts.

Requires drivers to use a hands-free accessory while operating a mobile electronic device.

Status: Passed the Senate on third reading with no amendments.

HB20-1227, Network-level Distracted Driving Technology
This bill would have required vehicles to include technologies that drivers could turn on to “limit distracting content” while driving.

Status: Scheduled for third reading and final passage on March 2

Would give the Denver Regional Council of Governments the authority to generate transportation funds through a variety of mechanisms.

Boulder position: Has not taken one, but has “supported the positions adopted by the Colorado Municipal League and DRCOG to oppose it unless it is amended to allow for local governments to opt out of the boundaries of such RTA and to ensure that any revenue generated would not come at the cost of existing funding from RTD or CDOT.”

Status: Scheduled for March 4 hearing in the House Transportation and Local Government Committee

Boulder position: None, but concerned with the “new liability” created by additional board members

Status: Scheduled for March 3 hearing in the Senate Transportation and Energy Committee