As the nation simmers with unrest over police brutality and extrajudicial killings of unarmed black Americans, Boulder is continuing its work to giver residents more control over cops.  This week brought calls for broad criminal justice reform from elected officials and other local leaders, including a multi-pronged plan from the new police chief herself.

An overhaul of civilians’ checks and balances over the police department has been in the works since last year, sparked by community concern after black Naropa student Zayd Atkinson was confronted by officers while picking up trash outside his Boulder home.

Council in late October voted to proceed with hiring an auditor to review internal investigations of serious misconduct as well as research ways to revamp department policies. Fifty-six city employees were laid off this week and 103 positions will be left unfilled in 2020, but the auditor will still be hired, a show of Boulder’s commitment to the project.

The first round of interviews was Friday. City council on Tuesday will receive an update on progress made since the fall.

One major development since 2019 is Boulder’s new police chief. Maris Herold came from Cincinnati, where she spent years reforming university and municipal departments. Herold laid out her plans for local action Tuesday, which included changes to hiring, training, officer equipment, data collection, use of force, and the way officers respond to situations involving mental health concerns.

Herold didn’t directly speak to the issue of scanner encryption, which media and access advocates have been warning against. Boulder PD has previously stated that closing scanners to public is under consideration but not imminent. Herold, prior to be hired, told the Daily Camera she would have to “educate” herself before taking a position.

On Tuesday, she said, “one of the first principles in police reform is making everything transparent … to everybody.”

That likely bodes well for residents who have criticized the opacity of investigations into alleged officer misconduct. Harold hinted that process might need some tweaking.

When there are incidents with officers, she said, there needs to be a system to “train, coach, counsel or remove the person who is at high risk.”

Some of Boulder’s police policies require “heavy lifting” to make them “model,” Herold said. She pledged to draw on best practices from around the world, importing some use-of-force guidelines from Europe.

That is notable given the stark differences in policing — and criminal justice as a whole — between the U.S. and EU. Many European officers do not carry firearms; the populace they are policing, of course, doesn’t have the ready access to firearms that Americans do.

“I will work diligently to make sure Boulder is a model agency not only nationally, but internationally,” Herold said. 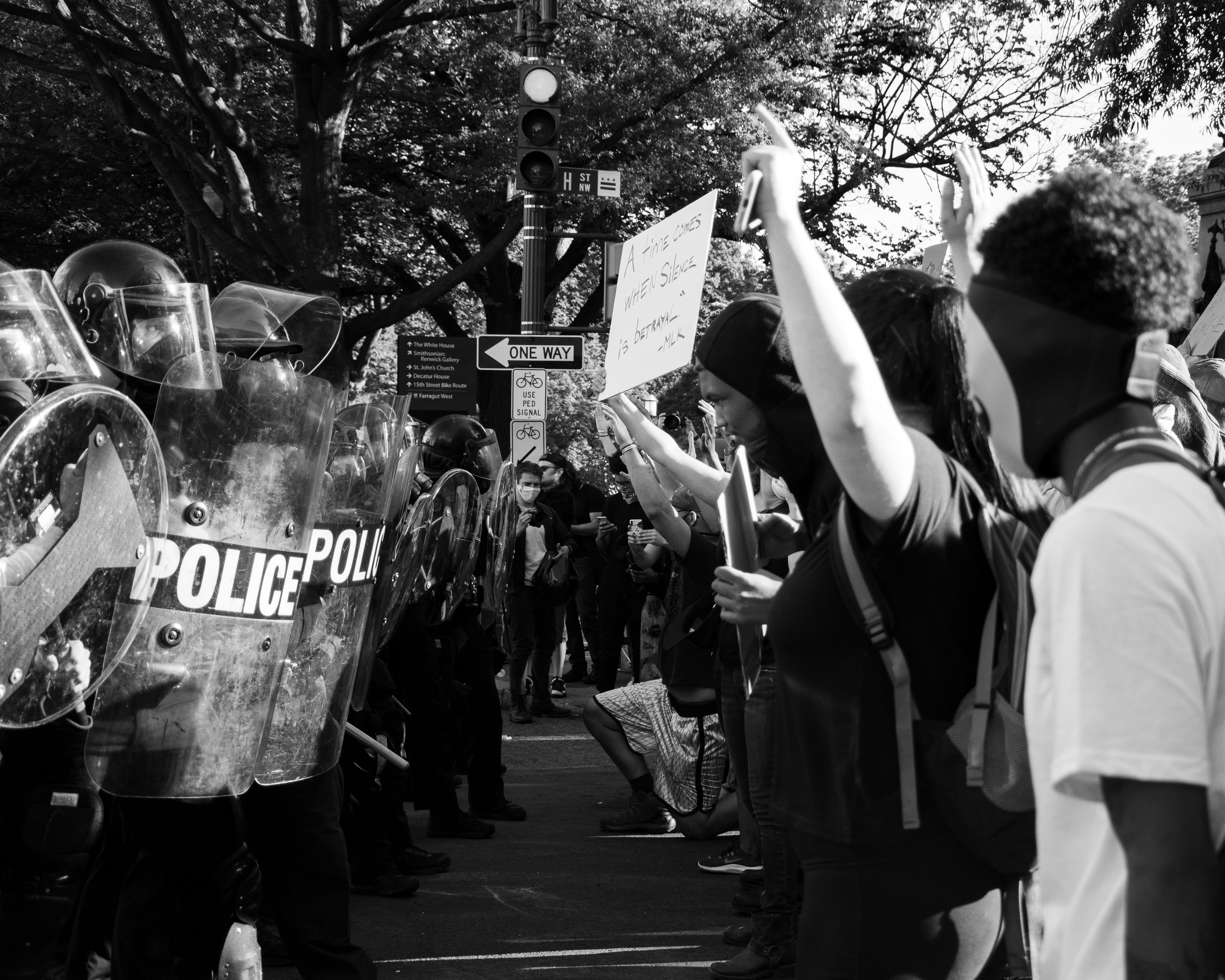 Photo by Koshu Kunii on Unsplash

The task force set up last year to research oversight models has continued its work, with many of its members staying on to lead implementation. Since January, the group has written a job description, recruitment plan and evaluation criteria for the Independent Police Monitor and developed guidebooks for a complaint process, police oversight panel and monitor role.

The monitor will sit on the 13-member Police Oversight Panel, joining 11 residents and one representative from the police department.

Task force members were encouraged by Herold’s track record and attitude. The chief has been sitting in on Zoom meetings since joining the city.

“My impression is that she is a powerhouse,” said Michelle Denae. “I think if she has adequate support in the department, she’s going to be able to make some good changes.”

Council members have also been impressed by Herold’s thorough presentations and plans and data-driven approach. They opened Tuesday’s meeting reflecting on the “pain, sadness and anger” caused by police violence, to use Mayor Sam Weaver’s words, and condemning “the heinous and unjustified killing of George Floyd.”

Councilman Bob Yates, later in the week, suggested that next Tuesday’s meeting start with eight minutes and 46 seconds of silence — the amount of time former officer Derek Chauvin knelt on Floyd’s neck.

Police oversight work is “one of our highest priorities,” he said Tuesday. “We want to make sure what happened in Minneapolis and other cities … never, ever happens here.”

While increasing civilian oversight is important, councilwoman Rachel Friend said, it is just “one of many things” that needs to be done to ensure a safe society for people of color. Council should also consider de-militarizing the police and amending use-of-force policies, she said.

“It’s not enough for us, people who have the power to act, to stand in solidarity or express sorrow,” Friend said. “We have to enact changes.”

Adam Swetlik and Aaron Brockett echoed those calls for a broader scope of reform. Mayor Weaver later signed a pledge from My Brother’s Keeper Alliance to review and reform use-of-force policies, and encouraged other council members to do the same. Chief Herold and City Manager Jane Brautigam supported his action, Weaver wrote in a public email.

Bombs in the budget

Police that look less like soldiers is an ask being repeated all across the nation — one that has been made for years as the quelling of peaceful protestors with tear gas and projectiles has sparked outrage and debate.

Since 1997, the Department of Defense has been required to make military-grade equipment available to local law enforcement, though provision of military equipment to police has been common for decades. Under the law, helicopters, grenade launchers, battering rams, armored vehicles, explosives, riot gear and more have been purchased by police; more than $5 billion in supplies has been transferred.

President Obama in 2015 placed limits on what cops could get, but President Trump undid those restrictions two years later.

Already, residents have begun making inquiries into police spending. In a serendipitous dovetail, a financial update and police oversight report are both scheduled for Tuesday.

In 2020, the police department had a budget of $38.6 million and 289.25 full-time employees — the second-biggest department by staffing after public works, which includes utilities and transportation. Six percent of the department was furloughed in April, though no officers, a city spokesperson said at the time. Three people were laid off, and six positions are being held open, according to information provided Monday.

Purchase of a $360,000 bomb truck is planned this year, to replace the 17-year-old existing vehicle that costs $24,000 annually to maintain. The truck “carries the bomb robots and the bomb team and will improve the ability of this regional team to respond to calls across all of Boulder County,” according to city spokeswoman Shannon Aulabaugh.

The department will also receive $120,000 in 2020 to purchase equipment allowing the issuance of electronic tickets.

The city also employs 5.75 school resource officers at Boulder Valley School District. The Boulder County NAACP this week called for cops to be removed from places of learning.

“Per your own data, students of color are disproportionately disciplined by the school district,” NAACP officials wrote in a letter to the school board. “It is apparent that engagement with law enforcement risks not only the academic success of students of color, but also their lives.”

Resident requests are critical to creating change, said Todd Conklin, a member of the oversight task force and implementation team.  After all, it was community pressure that forced the city’s hand on police oversight, he noted: Boulder had evidence of racial bias in traffic stops since at least 2016.

“(The community) should have a say in the way they’re policed,” Conklin said. “If ever they felt like the process was going awry, they should continue to push.”

Engagement is also a form of accountability, Denae added. Watchful residents can hold elected officials to the promises they are making now.

“We have to stay involved as the community,” Denae said. Otherwise, “it’s not being done: that’s kind of what got us here.”

Once people are tuned in, Conklin and Denae said, they need to stay tuned in. Real reform takes years, not months.

“The work has just started,” Conklin said. “Police reform is a long process. This will be a multi-year journey to get to a place where we have true equity and true justice.”

Author’s note: This article has been updated to include additional information provided by the city after initial publication.