One of Boulder’s most popular hiking spots is being rechristened as a wildlife sanctuary after a push by neighbors alarmed by since-abandoned plans for improved infrastructure. But what’s being heralded as a win for public engagement by residents has been interpreted differently by land preservation experts who say it degrades the value of such designations, to the detriment of people and the planet.

City council on Tuesday gave an implicit OK to the renaming of Wonderland Lake and Wonderland Lake Wildlife Sanctuary, by declining to review the Open Space Board of Trustees’ unanimous October recommendation. Open Space and Mountain Parks staff will begin installing signs bearing the new moniker, at an estimated cost of $15,000.

The area will continue to be managed for what it is, a high-visitation recreation area, so the change will be in name only. Staff defended the move against criticism by saying it reflects how residents feel about the ecological value of the land — a feeling fostered by signs that stood for decades calling the lake a wildlife sanctuary.

A proposal, the pushback and a petition

A resident petition sparked the process, begun after 2018’s disastrous idea to build a fishing pier, boardwalk and other facilities at the lake drew extraordinary outrage from the public. Some of the most vociferous opponents — a handful of whom are members of the Wonderland Lake Point homeowners association — became the founding members of Friends of Wonderland Lake, which initiated the official name change.

Their Change.org petition drew nearly 900 signatures from as far away as the U.K. and Hawaii, along with hundreds of Boulder-area residents. In city-sponsored engagement, 57% of residents supported the name change.

“The bottom line became that the vast majority of respondents” — both to the online petition and the official city process — “want the lake area to remain as natural as possible,” said Ina Robbins, a FOWL organizer. “The main usage of the space is to appreciate nature.”

This was not Robbins first go at defending the “piece and quiet” of what she calls “the crown jewel of Boulder” in her backyard. A few years ago she “made some noise” about a planned basketball court in the park near Wonderland Lake. It was never built.

The area includes a city park, managed by Parks and Recreation, and open space, managed by OSMP. Wonderland Lake itself is manmade. Boulder purchased it, and 78.9 surrounding acres, between 1972-1983, for $690,000 including water rights.

There is no OSMP designation for wildlife sanctuaries. The closest classification is Habitat Conservation Area, but Wonderland Lake isn’t that: It’s a Passive Recreation Area.

According to notes shared with OSBT and council, “Among the goals of Passive Recreation Areas are to provide a high level of public access, maintain or improve recreational and education opportunities while protecting and preserving resources, and accommodate high levels of visitor use with appropriate infrastructure and services.”

Wonderland Lake is considered a high-visitation area. It received 389,000 visits in 2016-2017, OSMP spokesperson Phillip Yates wrote in response to emailed questions, though he noted that the same people may have been counted multiple times due to the looping trail.

A wildlife sanctuary by any other name?

There isn’t a national standard for wildlife sanctuaries either, apart from those that care for captive animals. Nonprofits sometimes designate lands as ecologically important habitats, but not with any uniformity.

“Wildlife sanctuary is kind of a generic term like open space,” said Jim Petterson, Colorado director of The Trust for Public Land. It can mean different things in different places.

“It means nothing,” said Mary McFadzen, science outreach specialist for the U.S. Fish and Wildlife Service in the west. USFWS has no such definition for wildlife sanctuary.

Despite the lack of local and national standards, signs declaring Wonderland Lake as a wildlife sanctuary existed for decades. They were taken down in 2018 as part of a system-wide sweep of outdated or inaccurate signage, a move that coincided with planning for Wonderland Lake and the ill-fated proposals. Residents continue to view that timing with skepticism.

“OSMP has never had a ‘wildlife sanctuary’ designation” in its multi-decade history, department spokesman Yates confirmed in an email. The signs were posted in the late 1980s to discourage off-trail use. 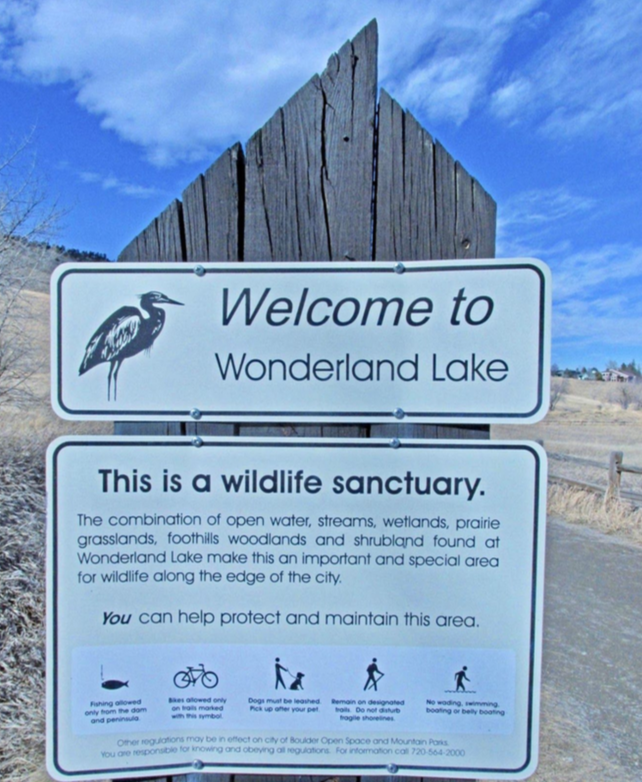 Nonetheless, many residents came to expect certain treatment of Wonderland Lake, using the signs in their arguments against adding manmade structures. Land preservation experts believe the new signs will create similar expectations that may not match the reality of a highly trafficked area open to hiking, biking and fishing.

“Words have power,” said Petterson, who spent 17 years with the Nature Conservancy. “A wilderness area, a national park — those terms conjure up certain images. Sanctuary carries a lot of weight as terminology as well.”

Moreover, the entire Wonderland Lake area will be deemed a wildlife sanctuary — not just the sensitive habitat surrounding the lake itself. That may impact what services and facilities pass public muster for the site as a whole.

“When you label something that does not have any guidelines to it, any qualifications, people look at it and they start expecting it to be managed in a certain way,” said Alison Holloran, executive director of Audubon Rockies.

The Audubon Society sometimes establishes Important Bird Areas. There are “very strict criteria,” Holloran said; oftentimes, areas with abundant bird life don’t make the cut because of its proximity to development or traffic, or the presence of invasive plant species. It’s important to have “sideboards” or the definition becomes meaningless and lose their power.

Calling something a sanctuary “willy nilly, it’s dangerous for both sides,” she said. “It would be better — for the wildlife, for the people, for the management — if it was done with some thought”

Wonderland Lake does have “high ecological value,” said OSMP Senior Planner Kacey French. Nesting birds use the shoreline — closed to the public — and non-avian species often come down from the adjacent foothills to traverse the area.

The renaming “will have no regulatory or policy importance and will not affect or influence OSMP’s management of the area,” according to staff notes. All the same recreational activities allowed today will still be permitted in the future.

While it won’t actually be a wildlife sanctuary, French said, echoing notes to OSBT, the new name “may feel reflective of visitor’s restorative experiences and feelings for the area.”

The passionate intervention by residents did shape plans beyond mere symbolism. Sensitive habitat near the shoreline was already restricted, but now they will be enforced (violators can receive tickets) and fences repaired to prevent wading. Fishing access paths will be more clearly defined, using natural materials. And some facilities are being upgraded, including the addition of a restroom at the trailhead.

Judith Ansara, another Friend of Wonderland Lake, doesn’t buy arguments that this will set a dangerous precedent in land preservation.

“This is a very particular situation in a small town and around a very particular place in the middle of the city,” she said. “It’s hard for me to make this leap that now this is going to be problematic. We have public lands all over the country, and some of them are open to logging or drilling or ATVing.”

Changing how people view Wonderland Lake wouldn’t be the worst thing, she said: Not to discourage recreation — “I’m all in favor of fisherman” — but to cultivate a mindset of quiet enjoyment.

“The reason for getting the petition was to bring back and preserve that psychological energetic sense of space, the sacredness of the natural world, the way you walk into any place of worship,” Ansara said. “That this is a rare place in the heart of the city. So to do anything that impacts public perception and acknowledgement and respect of that is a worthy effort.”