This Tuesday, council will give feedback on a plan to redevelop 2504 Spruce into 63 homes and an exercise room, with a possible landmarking of an existing building that is currently home to a pilates gym.

As a member of the Boulder Housing Cartel and an owner of a condo in the area, I received notice of the planned redevelopment in early 2021. I want to add my, “Hell, no!” to the pile of comments that city council is likely to witness at Tuesday’s public hearingScheduled time allocated for the public to testify or share commentary/input on a particular ordinan....

We have a climate emergency. The city of Boulder has over 60,000 incoming workers every weekday, and we want to build only a measly 63 residential units on 2.33 acres at a prime central location?

What are we thinking? We should be able to pack at least 100 units on that site. Two below-market rate units in such a high-rent location? A recent HUD publication written by Zhu, et al, showed that higher rent locations can profitably support higher levels of affordable housing. 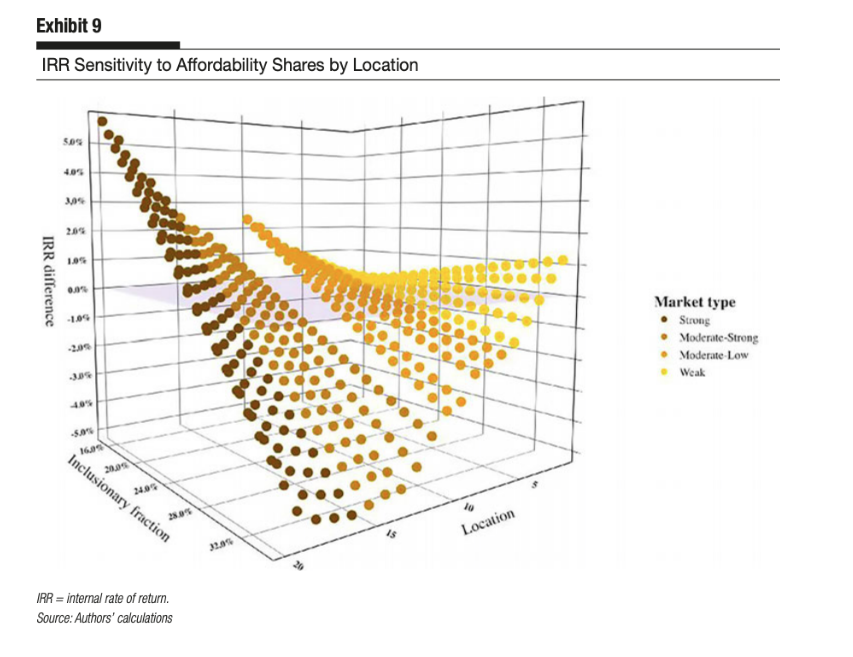 Figure 9 shows that a strong market, like Downtown Boulder and Whittier, can profitably support over 20% inclusionary (even without subsidies), as long as you zone for sufficient density. Why settle for 2/63 when we can have 20/100 or even more? High rents can enable rather than hinder development of low-income units. We’re lucky to have such a tool at our disposal.

Why build townhomes with their space-eating staircases? Boulder has enough stair-laden housing. A geriatric town like Boulder needs more wheelchair-friendly single-level units. We also need more very low-income units for the caregivers that change the diapers of Boulder’s aging NIMBYs.

1850 Folsom was built at a time when Boulder envisioned two towers per block for a 5×5 block area — 50 towers in all. Why did we stop after just two? Why did we downzone repeatedly to restrict housing capacity? The 55-foot height limit was supposed to be about safety. But fire prevention and suppression have come a long way; that is no longer a problem. (If water pressure for fire suppression were really a problem, why not enact terrain-sensitive height limits to allow taller buildings at lower elevations?)

People also invoked the limits of hydraulic elevators in support of the height ban. Advancements in the safety and energy-efficiency of electric elevators make that another nonissue.  Modern electric elevators employ AI and regenerative braking to cut their energy dramatically. Let people commute by elevator instead of cars. Why are we overlooking a real, on-demand personal electric vehicle that takes no new charging infrastructure? Building up is another valuable tool we have too long left unused.

Think of the low-wage workers that enable Boulder nightlife who currently must brave long, arduous commutes late at night, when transit is closed.  Think of the essential grocery workers who kept us fed through the pandemic.  Think of working parents who are unable to attend events at their children’s schools because they work so far from school. Or parents that never see their children because they work 2-3 jobs just to pay the rent. We should be building as many units for them as we can, using every tool at our disposal.

I bought my condo in December 2014. In January 2015, I received a similar notice for the townhomes at Folsom and Walnut.  Originally, they were supposed to be retail/commercial and parking below, with housing above, But the three stories plus parking, for four total stories, would have supposedly ruined the character of the neighborhood. So now, after years of delay and downsizing, we have a few $1.675 million condos instead.

I currently have a view of Longs Peak from my kitchen window. I will likely be able to see 2504 Spruce from my window when it is built.

Would I be able to enjoy the view of Longs Peak if I count how many people were trapped in long commutes, or holding multiple jobs to maintain my view? Or would I look upon a mixed-income development, surrounded by thousands of jobs, across the street from a park, and walking distance to many excellent schools, and think, “I did my part for climate change mitigation, equity and fairness”?

Grace Peng earned her PhD in Chemical Physics at CU Boulder/JILA and is currently Natural Resources Director for League of Women Voters of Los Angeles County. She is renting out her Boulder home to three CU students while in California caring for aging parents. As a homeowner, Peng acknowledges that restricting supply of housing would increase her home value (and rent), but “I’m a class traitor.”

Have a different take? Send your piece to boulderbeatnews@gmail.com. This opinion piece, like all the opinion pieces Boulder Beat publishes, does not necessarily reflect the views of this publication or its owner.

Another birthday with no party (thanks, COVID) But hey, at least I got to go ice skating on my walk to the DMV!

For your Wednesday morning recap, #Boulder, nothing quite sums up tonight's discussion like this.

Lastly tonight, an update on the investigation of Jessica Aldama's death. Specifically explaining the city's interactions with her before her death. At least "what we can legaly share," NRV says.

Next: Shifting council meetings from Tuesdays to Thursdays. Target date for that is July 14. https://documents.bouldercolorado.gov/WebLink/DocView.aspx?id=178207&dbid=0&repo=LF8PROD2