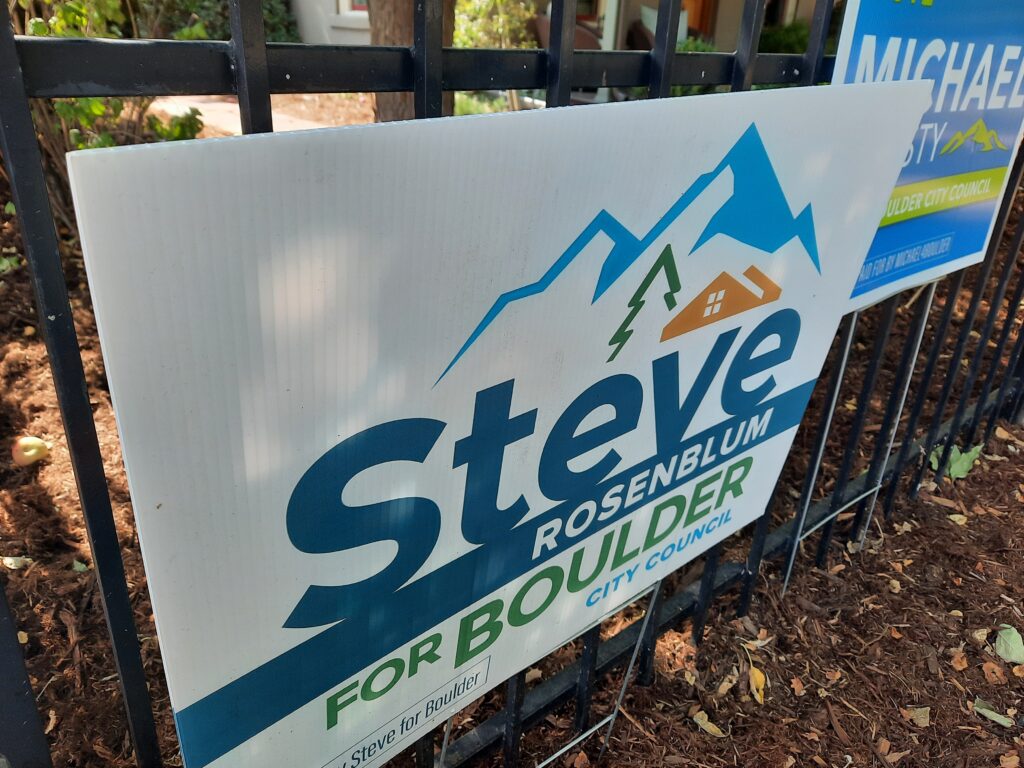 A complaint against former council candidate Steven Rosenblum may have merit, according to Boulder’s city clerk, but more information is needed to determine if campaign finance rules were broken. A hearing has been scheduled to determine whether or not legal costs — for action against backers of Rosenblum’s opponents — should be counted as campaign costs.

In September, Rosenblum filed suit against leaders of Boulder Progressives, local Sierra Club chapter and Bedrooms Are for People campaign, over social media and online posts that amplified leaked Slack chats from Safer Boulder, including posts from Rosenblum. The lawsuit alleged a conspiracy to prevent various political groups from endorsing Rosenblum, as well as defamation related to the leaks.

A group of residents argued that the focus on endorsements is why Rosenblum’s legal costs should be counted as campaign expenses. Candidates are required to disclose all spending and keep it under a certain amount in order to qualify for matching funds from the city.

Mark McIntyre, Jane Hummer and Regina Cowles — all of whom are loosely affiliated with various political groups that endorsed four of Rosenblum’s opponents — filed a formal complaint with the city a week after Rosenblum’s lawsuit was submitted to courts.

In response to their complaint, Rosenblum wrote that the lawsuit was not connected to his campaign.

“I engaged (Stan Garnett, of Brownstein, Hyatt, Farber, Schreck) in my individual capacity, not on behalf of my campaign,” Rosenblum wrote. (Garnett corroborated this in a letter to the city.)

The timing of the lawsuit was not related to the election, he continued, but due to “Colorado’s one-year statute of limitations for defamation claims.” A blog containing leaked material from the Safer Boulder Slack was first published in October 2020; the anonymous leaker is named in Rosenblum’s lawsuit as John Doe.

“The legal work I hired Brownstein to perform was not a political strategy, and had nothing to do with my campaign,” Rosenblum concluded. “The City of Boulder should be wary of accepting campaign finance complaints of this nature and requiring candidate’s personal legal services to be disclosed as campaign expenditures.

“If all of a candidate’s personal legal work during a campaign was considered a campaign expenditure, it would be impossible for candidates to defend themselves in personal lawsuits during a political campaign.”

A hearing is set for Feb. 14; a Boulder municipal judge will issue a ruling. Any penalty will be determined by the city clerk’s office, and could include forcing Rosenblum to repay matching funds.

Johnson did not find probable cause for other allegations included in the Cowles/Hummer/McIntyre complaint, including improper disclosure of personal investments and retention of Garnett’s firm for lobbying and/or public relations work.

A hearing for Rosenblum’s lawsuit against Boulder Progressives et al is set for February 1.

Another campaign, another violation

Another campaign was found in violation of campaign finance rules following a complaint from opposing campaign organizers. Save CU South — a group arguing against annexation of that property — failed to disclose major donors in two media ads, the city clerk ruled.

In her determination, Johnson wrote that ads in the Daily Camera and Boulder Weekly election guides “should have included disclosure by top contributors Thomas Mayer and Alan Boles” who each gave $1,000.

“Save CU South’s self-cure of reimbursing $1 to each of the contributors, thus reducing their contribution to below the threshold of $1,000 for reporting top contributors, is not acceptable,” Johnson wrote. “Cures are not determined by the committee and this proposed action does not provide a cure and lacks transparency to the public.”

Johnson ordered the campaign to publish clerk-approved disclosures in both papers acknowledging the violations.

A second allegation that those contributions should have been included on yard signs was not valid, Johnson wrote, because the money came in after the signs were ordered.

Save CU South was advocating for a ‘yes’ vote on Ballot Question 302, which failed. The complaint was filed by Leslie Durgin, Suzy Ageton and Jon Carroll. Carroll and Durgin organized Protect Our Neighbors to oppose 302.

Author’s note: This article has been updated to reflect that, while the municipal court will handle Rosenblum’s hearing, Municipal Judge Linda Cooke will not be presiding.

Want more stories like this, delivered straight to your inbox? Sign up for a weekly newsletter from Boulder Beat. Help make the Beat better. Was there a perspective we missed, or facts we didn’t consider? Email your thoughts to boulderbeatnews@gmail.com