A group tasked with figuring out the terms of a possible new library district has made its recommendations to Boulder’s elected officials, who will discuss them Feb. 8. Among the committee’s suggestions are a property tax increase, not to exceed $19 million a year, to pay for the library once it is separate from the city.

There are still many steps ahead before a district is formed, including votes of city council, county commissioners and the taxpayers. A ballot measure is planned for this fall, capping years of effort from advocates who say the library deserves a dedicated and stable source of funding that hasn’t been realized under more than a century of city control.

Catch up on the library district

The 12-member Library District Advisory Committee was tasked with working out the details of the eventual agreement between Boulder and the new district, its own self-governing entity. Among their recommendations:

A property tax of up to 3.8 mills, generating $19-$19.5 million annually, should be levied to fund the library enough to expand services beyond current offerings, the group decided. That would allow for long-planned branches in Niwot and Gunbarrel and enough money to tackle the $2-$3 million in deferred maintenance.

An exact amount wasn’t recommended, but the group also said funding should meet a vision for expanded service laid out in the library master plan. That vision called for $20 million in yearly library spending.

Boulder Public Library’s 2022 budget is just under $10.4 million, more than its pre-pandemic $9 million 2020 budget (that was cut substantially once COVID set in). But it’s not enough to tackle the litany of needed upgrades and replacements — HVAC and roof repairs at the main, Carnegie and George Reynolds buildings; replacing a materials handling machine, etc. — let alone to allow for additional locations.

Already, plans for the new North Boulder branch, scheduled for completion in 2023, were stripped back to save $2 million in construction costs. “Net zero energy goals, completion of the outdoor playground, pedestrian plaza, and maker space were all removed,” staff wrote.

A 3.8 mill levy would add around $200 per year to the property taxes for a home worth $850,000 within city limits. County residents would pay slightly more; around $230 annually.

Boulder would have about $10 million freed up in its city budget once it was no longer paying for the library, according to staff estimates: nearly $9 million from the all-purpose general fund and $1.4 from the 0.333 mill levy that is the library’s only dedicated revenue. In place since 1918, taxpayers would have to approve using that money on other things.

Just who will pay for the new library district is TBD. The entire city of Boulder is sure to be included in district boundaries, but beyond that, the advisory committee did not propose a specific service area.

One has been suggested previously, to capture the many county residents who are users of Boulder’s library. While that was acceptable to the committee, it follows current voting precincts that may change under Colorado’s redistricting process.

“As a result,” committee members wrote, “the LDAC decided to recommend criteria for council consideration when establishing the boundary rather than recommending a set boundary line at this time.” 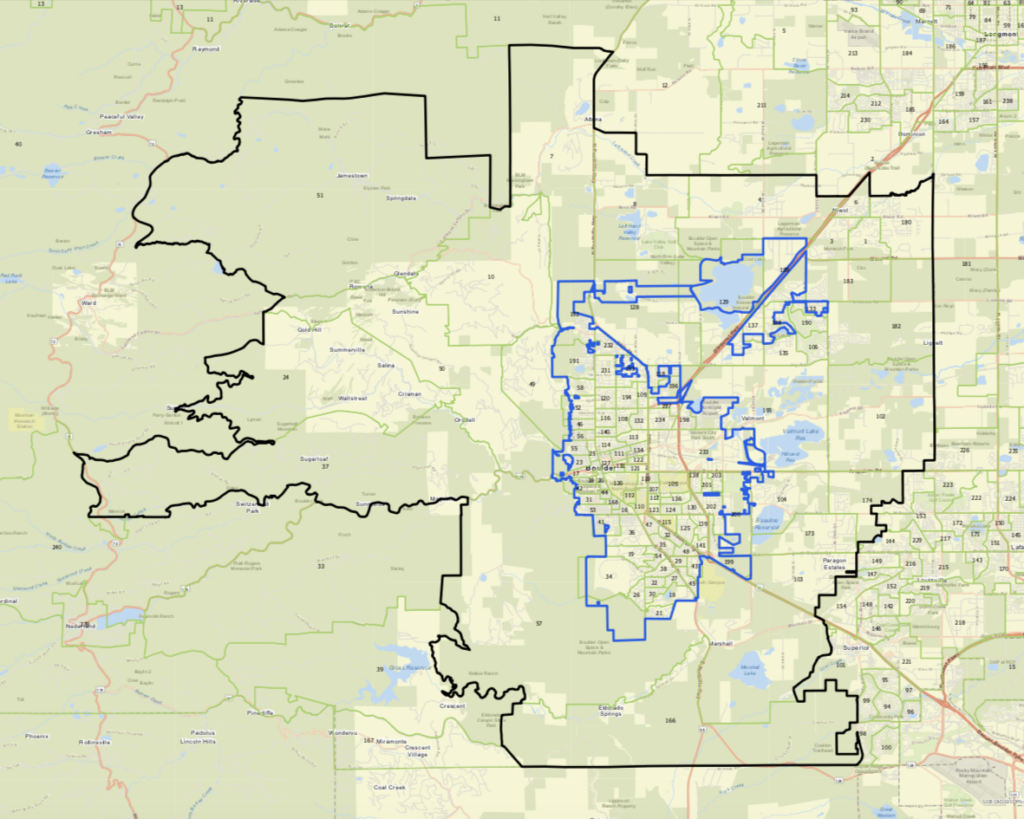 Likely to be a hard pill for council to swallow, the committee recommended that the city transfer ownership of all library buildings and assets — furniture, equipment, collections, etc. — to the district.

Three branches are owned by the city:

The committee suggested that land under George Reynolds, NoBo and the Carnegie also be transferred to the district along with the building. Boulder would maintain ownership of the land under the main branch, but not the building itself, under their proposal.

“The Library’s physical assets have been funded by Boulder community members and taxpayers since the city’s library was established, through a series of taxes, donations and bond measures,” members noted. “A library district will be funded largely by the same group of taxpayers, and therefore any asset transfer should not charge the district a monetary value for buildings or land to ensure that taxpayers are not ‘paying twice.'”

Two other sites are leased: the current NoBo corner library and the Meadows branch. The committee recommended that these leases be transferred to the district once formed.

Council will hear and discuss these recommendations February 8. Feedback will be incorporated, with staff returning to council on March 15 for another check-in. An April 5 public hearingScheduled time allocated for the public to testify or share commentary/input on a particular ordinan... and council vote to form a district by resolution is scheduled; that date is subject to change.

If a district is formed, voters within the proposed boundaries will weigh a tax on November’s ballot. That measure can fail three times before the district — which, without funding, would exist only on paper — must be disbanded. If the tax fails, the city and/or county will have to pay for the cost of the election; if it passes, the library district would foot that bill.

Want more stories like this, delivered straight to your inbox? Sign up for a weekly newsletter from Boulder Beat. Help make the Beat better. Was there a perspective we missed, or facts we didn’t consider? Email your thoughts to boulderbeatnews@gmail.com