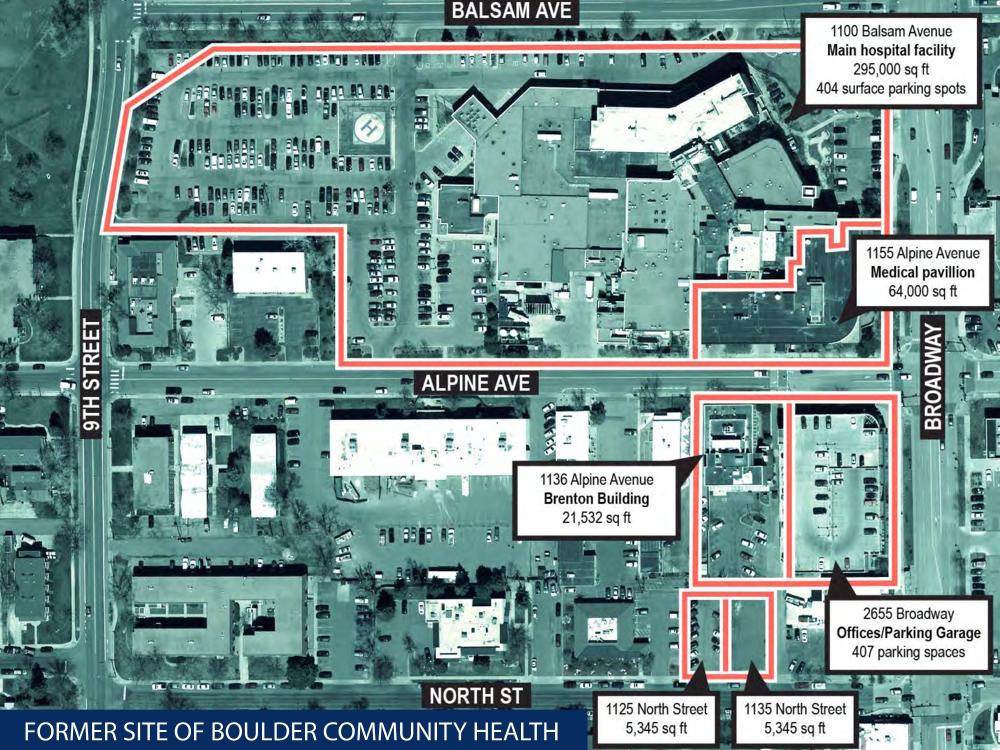 Boulder’s elected officials on Tuesday supported pursuing funding for a potential $57 million renovation of the Pavilion building for use as city offices. The Pavilion, located, at the old Boulder Community Health hospital site along Broadway between Alpine and Balsam, will allow two buildings to be removed from a flood zone and help fulfill the government’s vision of a city customer service hub along a major transit corridor.

“This is a chance to build a great public space, to live out our (transportation policies),” said Mayor Suzanne Jones. “This should be a really fun, interesting project that brings people together.”

Here’s a look at the two renovation scenarios:

Option 2: Renovation of 3 stories, basement and addition of a 1,400-square-foot partial fourth floor that will include a 4,000-square-foot outdoor roof terrace; 93,000 total sq ft

At a minimum, the Pavilion should be able to accommodate 260 members of staff, said Michele Crane, facilities design and construction manager. “Everything above that is a question of amenities versus staff.”

A new building of similar size to Option 2 would cost $61.5 million, according to staff estimates. That figure includes $1.5M to tear down the Pavilion. The city is already spending around $12M to sustainably deconstruct the old hospital.

Work on the Pavilion will not start until at least 2022. In response to a question from Jones about the delay, Crane said it’s “a realistic timeline for what it would take to design and go through our planning process, to actually get building permits.”

Why are we doing this?

The city bought the 8.8-acre BCH campus in 2015 for $40 million, with the hopes of using it to consolidate up to 14 of the 380 buildings and structures it owns across Boulder.

Park Central and New Britain are in need of significant upgrades: the maintenance backlog for bold buildings is between $1.5 million and $4 million. But because they are located in a high-hazard flood zone, the amount that can be invested in them annually is limited by law. New Britain’s expenditure ceiling is $472,950; For Park Central’s is $759,990.

“These buildings are increasingly nearing a point where major repair to mechanical, electrical and/or controls systems will need to be made to maintain appropriate temperatures in the buildings and operate equipment such as elevators,” city staff wrote in its notes to council. “However, these major equipment repairs and/or replacements are expected to exceed in cost what is allowed by the floodplain development regulations.”

Even with debt financing for the Pavilion renovation, the project’s cost will be equal to the city’s lease, operations and maintenance expenses for the three buildings within 34 years, according to a staff analysis. (The analysis uses Center Green expenses as a baseline, and accounts for 3% annual inflation.) By year 50, the leased costs will total $240 million, while the Pavilion project will come in at $140 million.

It will cost $2 million to demolish New Britain and Park Central. The city should move quickly on that, staff said: The buildings need to be empty within five years.

Boulder has an eye on its climate goals with the Pavilion renovation, too. The city has committed to an 86% reduction in carbon emissionsIn this context, the GHG that are released into the atmosphere from the burning of fossil fuels to g... and 55% drop in natural gas use in its buildings by 2030. To date, Boulder has decreased city building carbon emissions by 41% and natural gas use by 55%.

“Advances to climate goals which are really only going to be made with investments in our infrastructure,” Crane said.

The Pavilion project would drop emissions by a further 2% and natural gas use by 3%. Four thousand metric tons of carbon would be saved, equivalent to taking 850 cars off the road, staff says. Cost estimates for both renovation options include an extra $3 million to bring the building to net zero energy use.

City staff won’t necessarily end up in the Pavilion building; a financial analysis is underway now regarding deconstruction costs and possible uses. But council was generally supportive of the plan, citing the central location and access to transit that will make it easier for residents to utilize services.

“I’m a yes-yes,” Mayor Jones said. “With some enthusiasm.”

Two council members, Cindy Carlisle and Mirabai Nagle, expressed concern over the possible traffic that workers could bring “to a relatively calm spot,” as Carlisle characterized it.

“It brings out the curmudgeon in me, looking at the sort of grandiosity that will go into this,” she said.

“This type of density is unprecedented in this area,” Nagle added.

Crane said that initial traffic studies predict that vehicular trips will be less than daily traffic while the hospital was in operation. Those calculations did not include possible impacts from 311 Mapleton, which itself will be redeveloped as senior housing and a care facility in coming months. The 311 Mapleton data will be incorporated, staff said.

Councilwoman Mary Young pointed out that a higher mix of housing could dampen the demand for cars.

It’s a hard balance, Mayor Jones said. “We are in a period where we know transportation is shifting in the next 10-15 years, but it hasn’t yet.”

Though the property was built with city offices in mind, council in November said they would prefer housing to be the primary use of the site. Staff has honed in on four scenarios with different mixes of office and residential density.

Option 1 reserves 35-40% of the site as public green space, centrally located among the buildings. There are two variants:

Option 2 places the green space along Balsam; 30-35% of the site would be reserved for this purpose

Also to be determined is how much parking to include on the site. Each scenario provides for more between 500-600 spaces, per district requirements. One suggestion from the public was for shared parking between “daytime users” and residents.

“High-density housing isn’t in line with the neighborhood,” Nagle said. “I get that this is for the entire community, but I’m really hearing it from the people nearby. I have to represent the people writing in. They don’t want to say no to the project, but they want some re-thinking.”

Staff and other council members pushed back, noting suggestions that housing be affordable and targeted to vulnerable populations, such as formerly homeless residents and senior citizens.

“If we pull the number of housing (units) down, we’re going to lose that affordability,” Brockett said. Jones added that the neighborhood already has numerous three-story apartment buildings, some of which are quite unattractive. Anything built at Alpine-Balsam will be an improvement, she said, because the city is in the driver’s seat on design.
“If we build something ugly, that’s on us,” said Morzel.

The project could bring even more housing to the area, off-site from Alpine and Balsam. Boulder County has expressed some interest in moving its health and human services hub from Broadway and Iris, which would then be developed into homes or a mixed-use space.

Commissioner Deb Gardner attended Tuesday’s meeting along with James Butler, of Boulder County building services. About 120,000 square feet of space is needed to house all of the HHS staff; 80,000 of which would be public-facing.

Nothing is set in stone, Gardner said. “What we’re trying to do tonight is definitively send the message that we’re interested.”

Community engagement is ongoing through May 2019 as the Alpine-Balsam area plan is developed. Participants at an Oct. 29 community workshop were generally supportive of housing at the site, but reactions were mixed when it came to higher-density plans.

“Negative reactions came both from those who felt the plans did not allow for enough housing and those who were deeply concerned about how an intense level of density would impact the neighborhood,” reads the staff summary of the workshop.

Slightly less than half of online survey-takers said that additional housing at Alpine-Balsam was important, and nearly one-third said it was either not important at all or not important enough to trade for taller buildings or reduced parking.

Who’s weighed in so far

Workshop participants: 65 participants; 84% homeowners; 82% live in or near the neighborhood currently; nearly all attendees were white, staff noted

A couple dozen members of the public attended Tuesday’s meeting, although there was no opportunity for comment. The crowd still made its feelings known, muttering and shaking their heads in disbelief at times, and laughing out loud at others. A group of about 15 residents were clad in neon green T-shirts reading: “Don’t be DENSE Boulder,” and reacted strongly to expressed concerns over possible impacts to the neighborhood such as increased parking and higher-density housing.

For a play-by-play of who said what, read tweets from Tuesday’s meeting, compiled into a blog format using Thread Reader App.

Author’s note: This article was updated to include comments from the city council meeting.