Boulder’s elected officials this week bypassed a vote on all-winter sheltering for unhoused residents in favor of a larger discussion on the city’s approach to homelessness  at the upcoming council retreat. At least three council members have said they’d like to see a change in how services are provided; staff has defended the county-wide housing first approach, including a pending reduction in the number of shelter beds, and this week presented data indicating that none of the record 48 homeless deaths in 2019 were due to lack of cold-weather sheltering.

It has been two years since Boulder County switched up how its approaches homelessness, pooling resources into a regional effort. All unhoused individuals seeking services must go through the coordinated entry system and be funneled into the appropriate programs and facilities:

Since its Oct. 2017 implementation, 3,341 unhoused people have gone through coordinated entry, according to city of Boulder staff. Of those:

Officials spent much of the night asserting that the majority of homeless in Boulder are transient individuals just passing through. Staff-provided data seems to support this:

For this reason and others, staff argued that navigation services be folded into Boulder Shelter for the Homeless when the 30th Street location closes this summer. The recommendation comes from Homeless Solutions for Boulder County, the group overseeing countywide efforts. HSBC is made up of providers, city and county staff, elected officials and at least one person with lived experience.

Fifty beds will be lost through consolidation. Staff admitted in its notes to council that this may result in there not being enough beds during part of the winter.

Though the new system could meet “average demand,” there is not yet “sufficient capacity for program consolidation,” the meeting packet read. “Further work to increase housing exits, particularly for people who are high utilizers of BSH beds, is needed.”

Placing such individuals into housing has already freed up significant shelter capacity, according to staff. Fifteen high utilizers who were able to use vouchers to attain permanent housing resulted in 14,354 collective available shelter nights, a 45% reduction in persons who remain at BSH for 300 or more nights.

Still, even without a 50-bed reduction, there were nights last winter when there simply weren’t enough beds for everyone. Currently, when severe weather sheltering is at capacity, navigation beds are used for overflow. When both those are full, people are transported across town to Boulder Shelter for the Homeless.

“It seems reasonably likely that by the time 30th Street closes, we won’t quite have the same amount of space,” councilman Aaron Brockett said. “What’s our plan?”

Kurt Firnhaber, director of housing and human services, said he believes enough people will be housed by next winter to free up more availability at Boulder Shelter: “I’m more optimistic than you are about what the capacity will be,” he said.

“I appreciate your optimism,” Brockett rejoined. “But let’s say it doesn’t go quite as well as you think. What’s our plan then?”

There isn’t one, Firnhaber said, beyond attempts to reduce demand by spreading the word that Boulder is full.

“We’ve been telling homeless folks who are from outside the community what our shelter capacity is,” he said. “Many people can go various places seeking services. It’s important and responsible of us to indicate to people what services we have and what services we don’t.”

“The approach of trying to provide to everyone” hasn’t worked in the past, Firnhaber continued. “Our shelter capacity has always been relative to the space we have.”

“I don’t think we’re trying to provide for everyone,” Brockett said. “But we’re losing capacity. We can’t quite fit demand into space. I need a plan.”

Brockett proposed keeping winter sheltering open every night of the season, October to May, a suggestion he made in 2019. But the conversation never advanced to a vote.

Council members Adam Swetlik and Rachel Friend indicated that they plan to make policy suggestions regarding homelessness a key part of their 2020 agendas, to be considered at the upcoming retreat. Mayor pro tem Bob Yates suggested that the sheltering conversation continue as part of that discussion. A vote may be taken there or scheduled for later.

Councilwoman Mary Young indicated her unwillingness to expand sheltering, mounting the same defense she used last year to vote down the proposal: That doing so would draw more unhoused residents to Boulder, typing up resources that could otherwise be used to provide long-term housing.

“I want to make sure we’re not working against ourselves where we end up providing or giving people the choice that is less healthy for them,” she said.

Staff shared some data from the Boulder County coroner on the 48 homeless deaths. No one died on a night shelters were over capacity, Firnhaber said.

Nineteen of the 48 were housed at the time of their deaths — the list always includes long-time or formerly homeless individuals, known to providers — and 23 were currently unhoused. Only one exposure death occurred, on a night shelter was available.

That makes it all the more important that we place as many people as possible into permanent housing, he said.

Firnhaber also restated the controversial claim that increased services draws more homeless people to the area. He used data from when shelters were run by Boulder Outreach for Homeless Overflow (more commonly known as BOHO). As capacity expanded, so did the number of those seeking them. 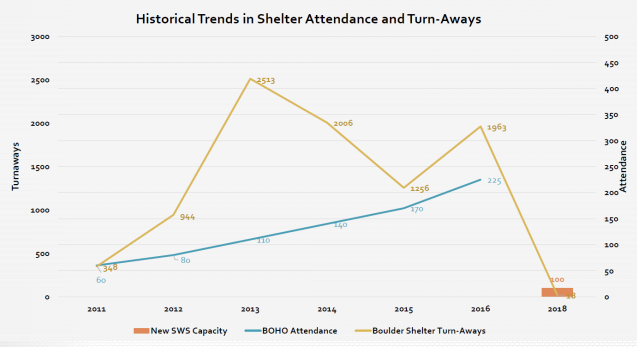 Homeless advocates have argued that correlation does not equal causation. The period was also marked by an increase in the numbers of unhoused across the county and steep increases in housing costs locally, one of the biggest drivers of homelessness.

Ebner herself on Tuesday noted that counts of unhoused residents have risen along with general population growth, though our per-capita homeless numbers have dropped. Boulder County’s point-in-time counts are in line with some of our neighbors and peer communities; in others, homelessness has increased exponentially.

Several community members spoke during open commentDedicated time at the beginning of regular council meetings, where up to 20 members of the public ca... to request that Boulder keep shelters open every night during the winter season and reevaluate its camping ban in light of recent legal challenges to the policy in other cities and states. Darren O’Connor, an attorney and frequent critic of the city’s approach to homelessness, delivered a petition with 300 signatures requesting all-winter sheltering.

“I hope the volume of emails (and signatures) is indicative of the community desire” for better services, O’Connor said.

Even if enough beds are technically available, Sarah-Jane Cohen noted, those with pets or children can’t access them, nor can those who have been barred due to behavioral issues. Such individuals have “no legal sleep options,” Cohen said — something referenced by the Denver judge who ruled that city’s camping ban was a form of cruel and unusual punishment, violating the Eighth AmendmentChange made to existing documents, resolutions, or ordinances to the U.S. Constitution.

Mark Gelband, another outspoken critic of the city on this and other policies, compared Boulder’s laws for people to those of animals. It is against city law to allow a dog, for instance, to remain outside without adequate shelter from the rain, snow or heat. The camping ban prevents unhoused people from exactly that: using shelter to protect from the elements while they sleep.

“It’s morally reprehensible for any of you to sit up there and allow one more person to die in the city of Boulder because they can’t use a sleeping bag (or) raincoat (or) tarp,” Gelband said. “You are complicit” in the deaths of unhoused residents.

Others argued that homeless deaths, which have galvanized concern and action, should not be the measure Boulder uses to analyze its policies.

“Looking at death is a really, really low bar,” said Madeline Goldstein. “Can we sink any lower? Even if people aren’t dying on the streets, somebody is paying for their healthcare if they’re out on the streets at night.”

Michele Rodriguez, a formerly unhoused resident, attended last month’s memorial service for many of her homeless friends. Another is currently in the hospital, she said, having his fingers amputated due to frostbite.

BY THE NUMBERS: More on homelessness in Boulder County

846 people used SWS for at least one night

Most use: 117 nights by one person

63% of city expenditure on adult homelessness

Keep Families Housed launched in 2017: Pays for rent up to three times a year; payments #2 and #3 tied to certain requirements (getting kids to doctors, etc.)

View a thread of Tuesday night’s council discussion here. View comments made by the public here.