The rising sun was still filtering through the trees as more than two dozen gloved and masked volunteers, including two elected officials, helped an older, unhoused couple pack up all their earthly goods from where the pair were camping alongside Boulder Creek.

Sam, who said he preferred to be known by the name Kicks-a-Hole-in-the-Sky, is a 50-year-old Lakota man. He and his wife have been unhoused for five years, ever since he says they were evicted for smoking in a non-smoking apartment. They are on the waitlist for affordable housing in Boulder County, they said, but their immediate plans — after Boulder police gave notice that they intended to clear the encampment — are to “move further up the canyon.”

Community members blocked police and private contractors from accessing three encampments Tuesday morning. They themselves cleaned up garbage that had accumulated on the bank of the creek in two separate locations, near the Glen Huntington bandshell and behind Boulder High School, gathered possessions, offered socks and masks, and provided a truck to haul residents’ belongings to wherever they decided to settle next.

Unanimously across the separate camps and groups, the response to “Where will you go?” was: Somewhere else in Boulder. As one 25-year-old male resident said, “Where it’s hard to see us.”

That has been a chief criticism of such sweeps: That they don’t present solutions to homelessness, as defined by either of Boulder’s competing factions.

Advocates point out that moving people doesn’t get them closer to housing and in fact harms them by taking away many of their possessions. Neighbors, frustrated by the proliferation of camps, may be pacified when groups are removed from their respective neighborhoods, but the reappearance of encampments elsewhere inevitably results in a resurgence of requests to remove them from this new area.

Those living near encampments have made repeated pleas to police and elected officials to enforce Boulder’s camping ban. Such missives frequent subject of emails to council members, Aaron Brockett said, and the topic most likely to come up during casual encounters with constituents.

He and Rachel Friend were in attendance Tuesday to observe and assist. They spoke with officers, members of BPD’s Homeless Outreach Team.

“I’m here to make sure people are treated respectfully and they are given a chance to keep their belongings,” Brockett said.

Camping ban violations come in the form of tickets that, when accumulated and unaddressed, lead to jail time. But as such facilities have become hotspots for the spread of COVID — some of the state’s largest outbreaks are in prisons and jails — leaders are trying to reduce populations, not increase them for misdemeanors and other non-violent offenses.

The Centers for Disease Control recommends allowing encampments during the pandemic, focusing instead on site sanitation and access to water and restroom facilities.

“If individual housing options are not available, allow people who are living unsheltered or in encampments to remain where they are,” the guidelines state. “Clearing encampments can cause people to disperse throughout the community and break connections with service providers. This increases the potential for infectious disease spread.” 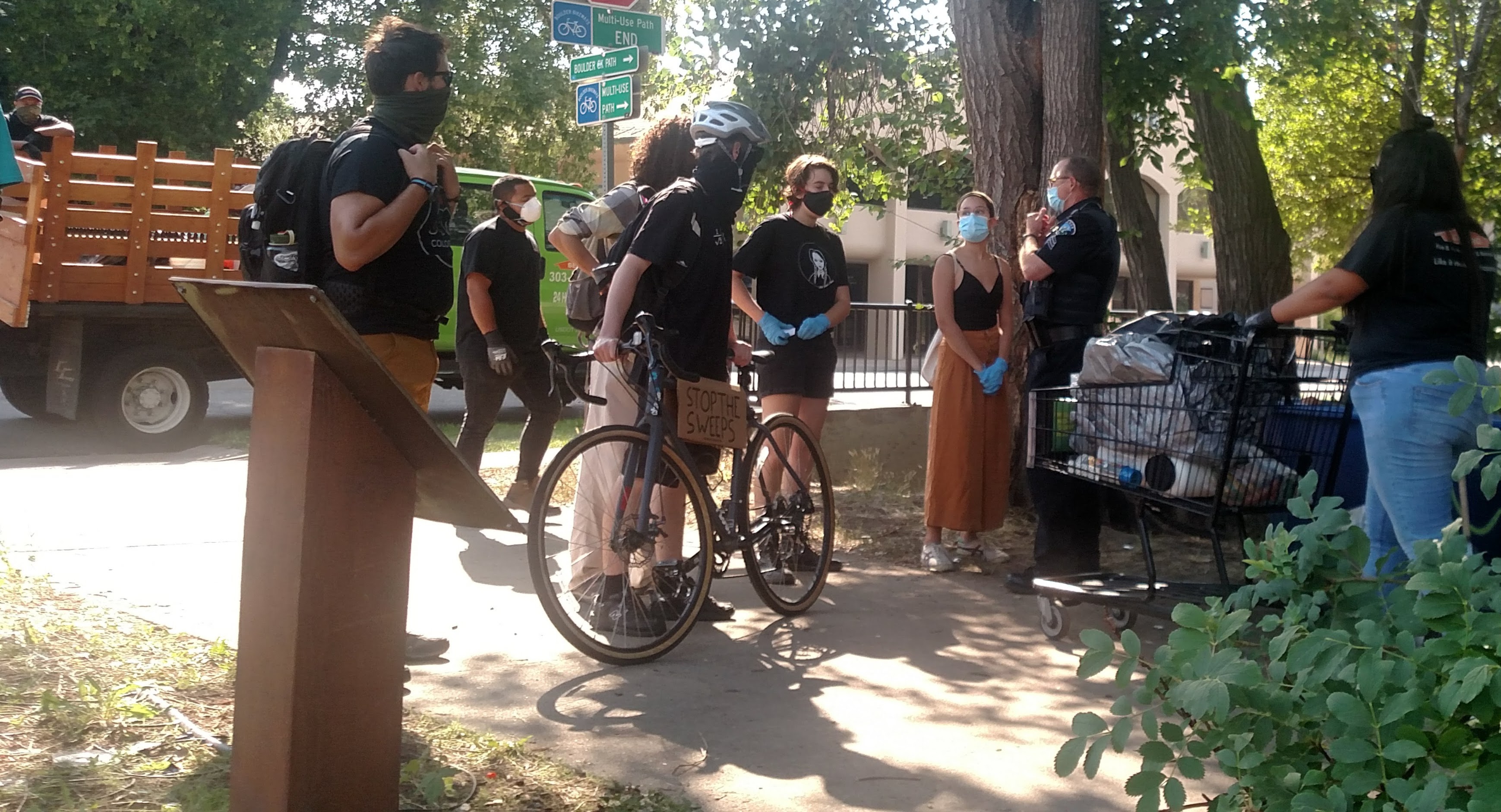 Health advice has not stopped Denver from clearing out large encampments recently, urged and applauded by Governor Jared Polis. Boulder’s city council has not expressly addressed the issue of encampments this year; they discussed homeless services in June.

Police Chief Maris Herold, in an Aug. 6 meeting of the Police Community Dialogue and Engagement Panel, said a lack of clear direction from elected officials means police bear the brunt of public criticism for sweeps. She believes consistent enforcement will deter people experiencing homelessness from re-establishing encampments, but the last “really big cleanup” was in February — pre-pandemic, and following approval from a council majority to step up sweeps in exchange for expanded winter sheltering.

“Will the silent majority support the action that I think myself and other city departments are willing to do?” she asked. “We just don’t want to be left” shouldering the blame.

Audio of the discussion was shared with Boulder Beat.

“People are afraid to speak out in a way that doesn’t sound caring,” said Drew Eisenberg. “I think the most vocal people are probably going to be anti-ban (but) the majority are probably pro-ban.”

“We need to get some pressure going on city council,” said Mallory Kates. “They can’t hang the police out to dry like this. They have got to make it public what they’re asking the police department to do or not to do.”

Council’s June discussion centered on sticking with a housing-first approach that placed hundreds of people in homes. Yet those residents are still just a fraction of total unhoused population and of those targeted for permanent housing via coordinated screening.

Shelter beds are extremely limited and reserved for those with disabilities (though the definition is broad); waits for permanent units are long. To serve those left out of the current system offerings, safe camping and parking are currently being explored by Boulder’s Housing Advisory Board and Human Relations Commission; councilwoman Friend on Saturday sent a public email asking that council again discuss designated parking.

Kicks-A-Hole-In-The-Sky and his partner fall into that category. They have been in Boulder for more than a year and engaged with the system almost immediately, they said. And yet, they remain unhoused.

“We’re still waiting,” he said. “What are we supposed to do?”