Think for a moment of something you love about Boulder — the mountain backdrop, the trails, the shops along Pearl Street. Whatever it is, our community fiercely believes in preserving the magic of Boulder. That passion to protect Boulder sometimes manifests as a reluctance to allow change.

When it comes to Boulder’s housing market, doing “nothing” will result in a different kind of change. As homes turn over, they’re being sold for incredibly unattainable prices. It was shocking when Boulder’s average single-family home price first crossed the $1 million mark in 2016 (the median price was $905K then).

Median prices have hovered just under $1 million since, with multi-family homes (condos, townhomes) providing a lower barrier to home ownership. In April, Boulder’s median single-family home price reached $1,557,500, up 55.74% from a year before. It’s not uncommon for older homes in need of rehabilitation to list for $750K+, or for sellers to receive multiple offers over the asking price.

Meanwhile, condos prices have increased out of reach as well, making it unlikely that the more than 50% of Boulder’s population who are renters(1) can buy a starter home to build enough equity to help them move up when their family composition changes.

Boulder sellers are cashing in on increased market values, and who can blame them for taking the highest offers? But the extremely high prices are changing neighborhoods.

House-poor buyers who barely managed to qualify for large mortgages have no money left for remodels or even upkeep. Wealthier buyers often opt to replace aging, outdated homes with larger McMansions that drive up average home prices further. The more expensive homes become, the more likely that even upper middle-class households will require some sort of subsidy to stay, or that they will leave Boulder along with the service workers, teachers, police and firefighters.

The only path forward that is progressive, inclusive and fair is to rethink our approach to affordable housing. It’s not enough to set aside a percentage of homes for the affordable housing program or to demand higher commercial linkage fees when most new multifamily developments take years to build. Boulder Junction’s plan was envisioned in 2007, and even the city-owned parcel earmarked for affordable housing hit obstacles finding a developer who could build in time to avoid losing much-needed federal grants. Across town, Boulder is five years into redeveloping Alpine-Balsam, with no new homes even close to being built.

Nationally, progressive cities are attacking high prices and housing shortages with policies that also unwind exclusionary practices such as zoning and unrelated occupancy limits. Minneapolis became the first large American city to end single-family zoning, allowing up to 3 homes per lot without special reviews. Oregon’s House and Senate passed a bill that would do away with unrelated occupancy restrictions altogether.

In Boulder, we have the opportunity to support a meaningful change that will allow more of our neighbors, service workers and graduating CU alumni to remain in Boulder, strengthening our community through diverse experiences, economic status and skills. That choice is quite common-sense: Stop setting occupancy limits based on relationship status.

Boulder’s Bedrooms Are For People petition ties occupancy to the number of bedrooms. If a home has five bedrooms, it can safely accommodate five persons (plus one extra if one person is sharing with a partner or dependent).

Reforming Boulder’s occupancy restrictions addresses housing affordability by allowing singles, couples and families to pool together resources to split rent, utilities and household duties. It allows the efficient use of our existing homes’ bedrooms for their original purpose — bedrooms — even as traditional nuclear family sizes have shrunk.

While critics argue there is no proven link between occupancy and affordability, people sharing homes are experiencing the cost savings firsthand. Consider the following scenario: Five people need housing in Boulder and desire sharing a home. Under today’s occupancy restrictions, their options are limited to spreading costs over multiple dwellings, increasing each individual’s expense. 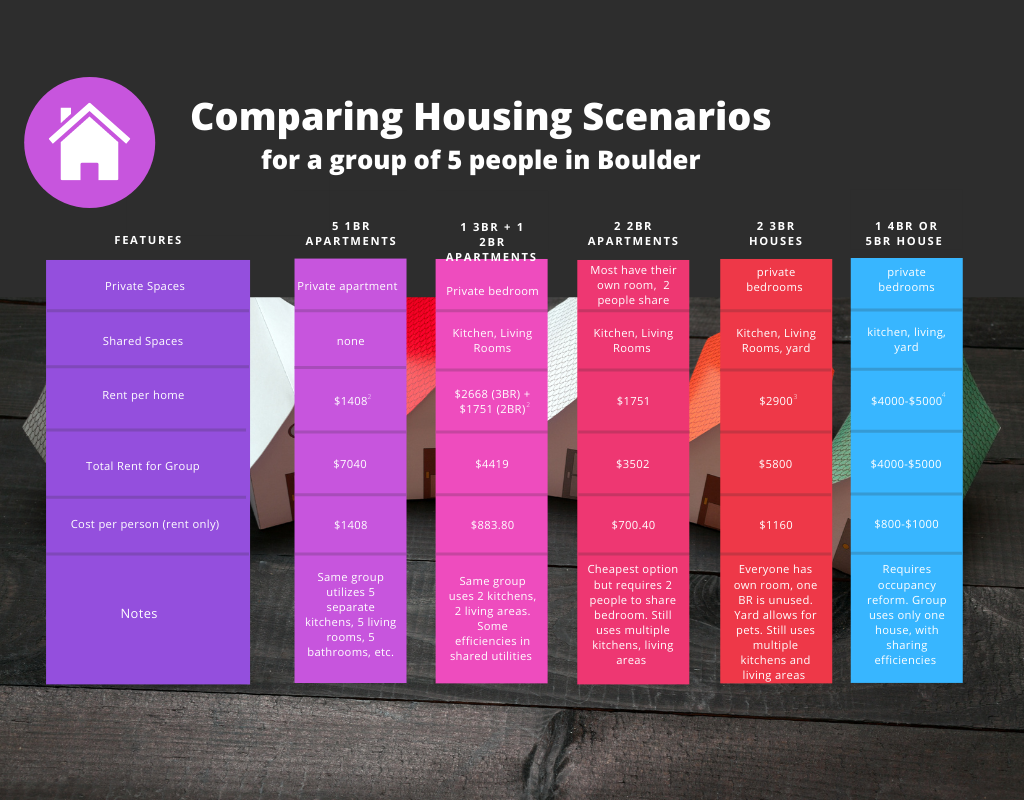 Instead of five people occupying two three-bedroom homes under today’s restrictions, five people can rent one four- or five-bedroom home and reduce their monthly expenses. The second home or individual apartments that they would have rented under today’s rules become available for others, without waiting years for new housing to be built.

If Boulder continues with business as usual, we can expect housing prices to continue to soar beyond the reach of most residents. This year, it’s time to support a common-sense change that permits young people and working-class residents to efficiently share expenses and existing homes.

As of Tuesday, May 11, the Bedrooms Are For People campaign had successfully collected the number of required signatures through Boulder’s new Direct Democracy Online petition system. (The campaign will continue to accept signatures through the June 4 deadline.) Pending city authorization, you will be able to vote on occupancy changes this November. Learn more about Bedrooms Are For People at bedroomsareforpeople.com.

Rebekah Dumouchelle became interested in local civics to support safer and friendly streets and mixed-use neighborhoods that encourage walking and cycling for all ages. She is a volunteer with Bedrooms Are For People.

Have a different take (on this or any other issue)? Email boulderbeatnews@gmail.com to submit your own opinion piece.