A split council voted to decide the fate of Diagonal Plaza, with its vacant spaces and constant cycle of tenants. The city would not intervene but instead wait for revitalization to occur on its own, elected officials decided. After all, the country was still feeling the effects of an economic downturn. Surely conditions would improve as recovery took hold.

The year was 2010. Though more than a decade has passed, time seems to have stood still — or at least looped — for the ’60s-era shopping center. Storefronts are still empty; businesses have continued to come and go: Albertsons, Ross, PetSmart, Sports Authority, Walmart.

On July 13, when the current city council returns from summer break, they’ll get a chance to weigh in on the first real plans for redevelopment since their predecessors declined to take action.

It won’t be an actual vote, just a high-level look at the proposal for nearly 200 units of housing, streets and sidewalks, a park and a long-hoped for expansion of an existing affordable housing neighborhood. But it will be the most action the area has seen in a decade, despite plenty of attempts to reinvigorate one of the largest parcels in Boulder, one with excellent potential to fulfill the city’s vision for non-car centric neighborhoods.

“This is probably one of the most consequential land use decisions this council will be part of,” said councilman Bob Yates, during the unanimous June 16 council vote to review plans. “This site will be a catalyst.”

Diagonal Plaza had gone through “several years” of rotating tenants declining tax revenue when the city took up the cause in 2010. They went all in: Staff devoted months to the effort; Urban Land Institute was commissioned for a study; and the Boulder Urban Renewal Authority was activated for only the third time (the first two being redevelopment of Crossroads Mall into today’s Twenty Ninth Street Mall and the area that is now home to the St. Julien hotel and a city parking garage).

Analysis revealed that redevelopment was unlikely to occur without city intervention. Land costs were too high and zoning too restrictive to allow for a financially feasible project, staff wrote in a November 16 memo to council. Furthermore, the patchwork of property ownership on the site made coordinating them all into collective action somewhat like herding cats.

“It is unlikely that Diagonal Plaza will successfully redevelop in the next five to ten years without active city participation in helping to overcome these substantial logistical and financial obstacles.”

A blight study would open up more funding possibilities. The area appeared to meet many of the state’s criteria for blight, but a 5-4 council declined to green-light the study, leaving its fate to future, private developers to pursue piecemeal.

The announcement was made without fanfare until months later, when another proposed project prompted a public outcry and 10-month moratorium on development within the opportunity zone. Shopping centers like Diagonal Plaza were the first to break free of the ban after rules were rewritten to allow more housing but retain first-floor retail.

Diagonal Plaza’s owners are making use of opportunity zone funding, but it is more of a “sweetener” than motivating factor, according to market rate developer Jarvie Worcester of Trammel Crow Residential. (Though, at a May 20 Planning Board hearing, the team said opportunity zone funding was essential to convincing the property owner to sell.)

“If there’s 10 boxes you want to check for a project, we checked all of those boxes before the opportunity zone funding,” Worcester said. “We were excited about this location regardless, but there was certainly value. It creates a place that people need and want to own long-term because of the benefits that program provides.”

More important was getting an elusive landlord on board, putting the largest parcel of the site under a single owner. Most of what will be redeveloped is actually empty parking lot.

The vacant former Sports Authority and occupied Walgreens (previously Rite Aid) are the only buildings that will be impacted. Walgreens will move its employees and prescriptions to its location two blocks south on 28th and Valmont, according to developers. (Messages to Walgreens company officials were not returned.) 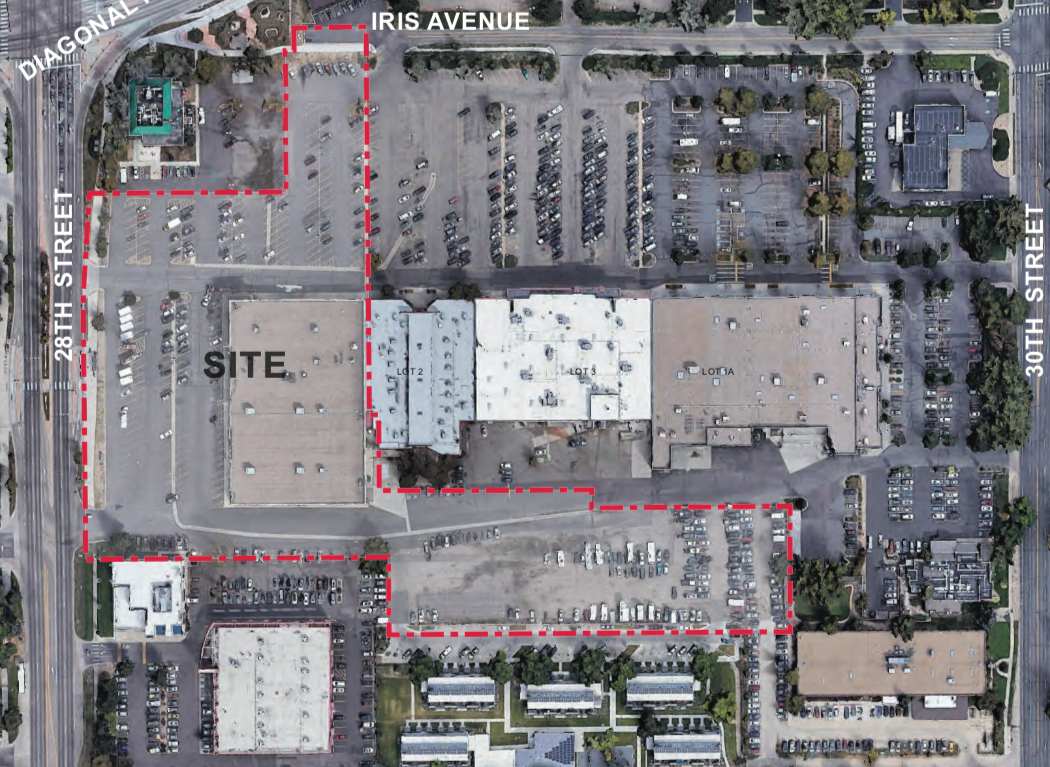 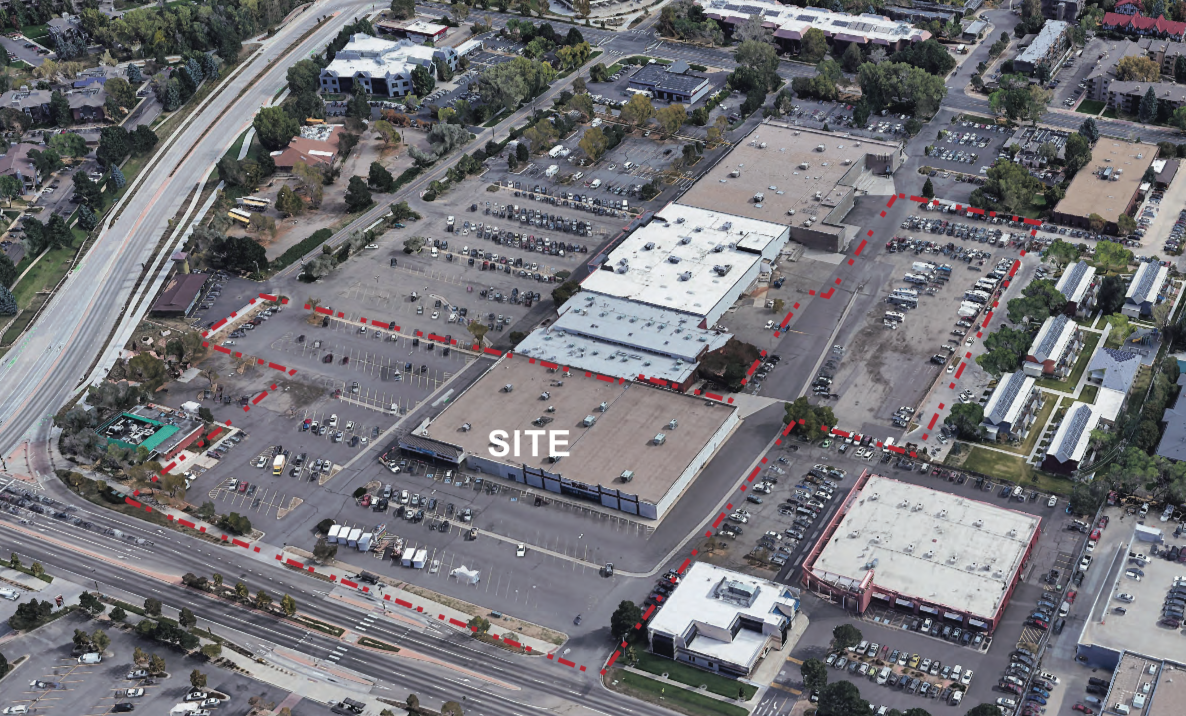 Holicky is hopeful that improvements — such as streets and sidewalks to replace informal cut-throughs on the south and north sides — as well as a park will “put more people on the street” that will create potential new customers for the few remaining retailers.

Affordable housing will go next to Diagonal Court, a neighborhood Boulder Housing Partners has been hoping to expand for years.

“We’ve always had our eye on this big parking lot here,” said BHP Development Director Laura Sheinbaum. “We’ve never had the financial ability to go after it.”

Diagonal Court is ideally located for non-vehicular living (though parking is provided). There is grocery store, a gym, banks and restaurants mere steps away. Multiple bus stops are situated within a quarter-mile in each direction. Bike paths lie nearby to the north, west and east.

The biggest impediment to walkability, according to Holicky, is the undeveloped parking lot on which homes will eventually be built.

“The second you leave this flourishing community, it’s a war zone,” he said. “The only way to get to the grocery store is to go through a parking lot with drainage problems and trucks driving through it. There’s no sidewalk. If this does get connected to the street, all the sudden kids are hopping on a bike, riding through a park, on a sidewalk, to the grocery store.” 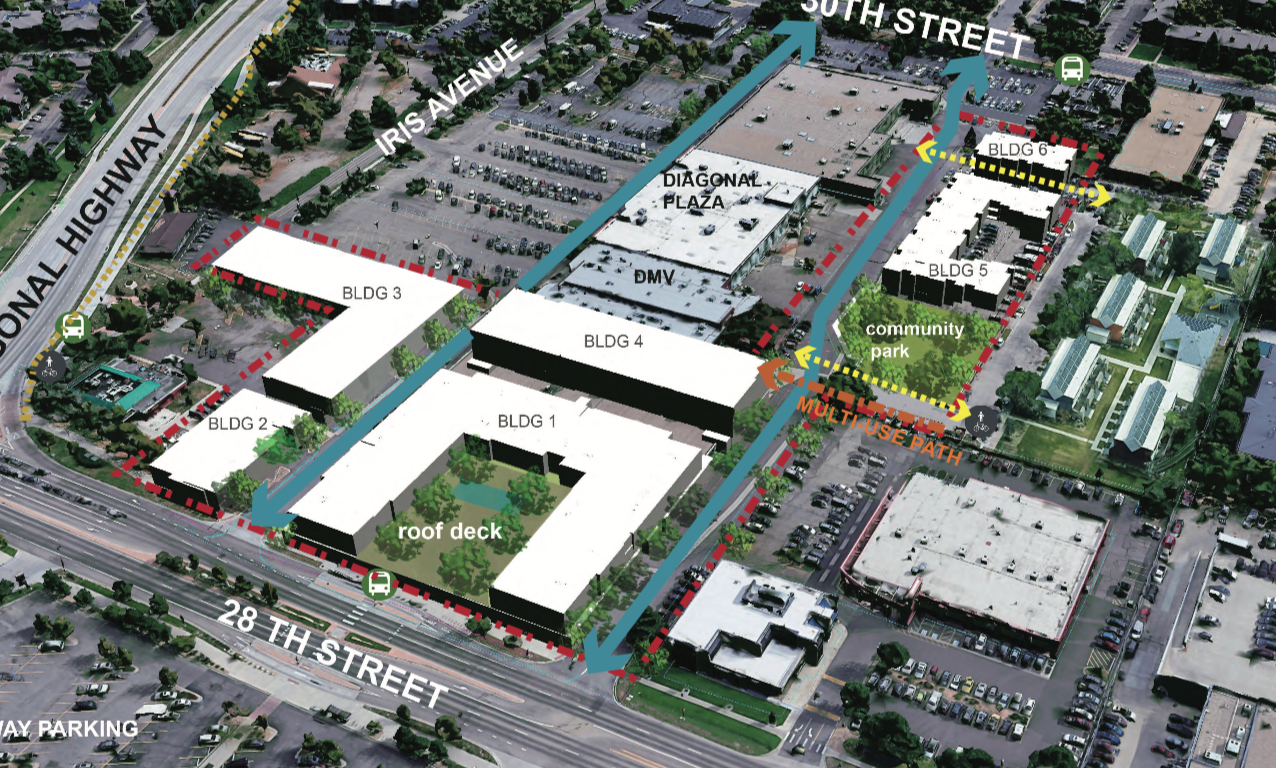 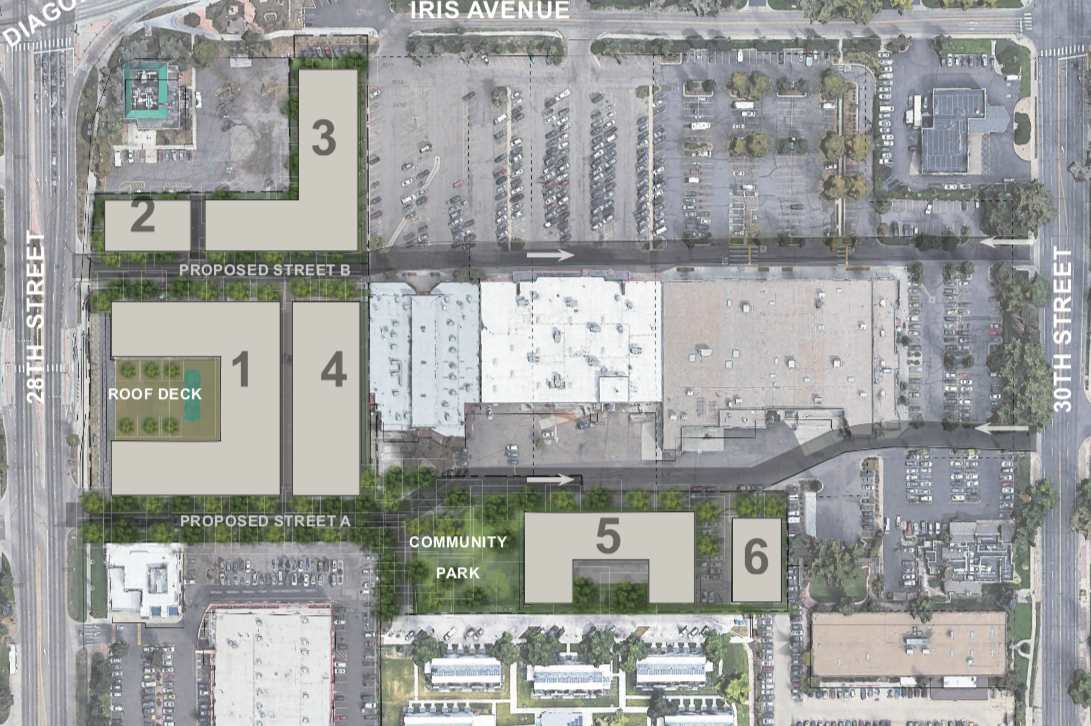 All this is theoretical. What’s being considered July 13 is a concept plan; developers aren’t asking for anything yet other than feedback on what they’d like to do in the future.

It’s an atypical proposal in that it includes two possible scenarios, based on whether or not Planning Board and city council want to allow a fourth story. Additional height (still below the city’s 55-foot voter-approved limit) would result in an extra 18 market-rate housing units and eight more affordable homes.

Also unusual are regulatory changes that will be needed to allow practically any housing to be built at Diagonal Plaza. The area is zoned Business Commercial-1, which still has fairly onerous requirements for open space: 1,200 square feet per dwelling. That means about 2/3 of the planned site would have to be outdoor or shared space, Senior Planner Elaine McLaughlin, limiting housing to around 50-60 units.

A change in zoning could be requested, but “to rezone in the city of Boulder is fairly unusual,” McLaughlin said. “We don’t do many rezonings, mostly because the assumption is the zoning that’s established today is the result of a comprehensive process,” based on the Boulder Valley Comprehensive Plan.

Changes to the BVCP itself would be a better option, according to McLaughlin. There’s already an established process and specific policies for encouraging this type of housing and revitalization of commercial areas, including one in which Diagonal Plaza is specifically called out.

“There’s a history of wanting to see something happen on the site,” McLaughlin said, and “a really good opportunity” to add residences to what is today “a big, bombed-out parking lot.”

Building a city, one piece at a time

At this stage, Trammel Crow and crew aren’t asking for any particular variance or flexibility in the rules. They’re simply presenting what they’d like to do and hoping a way can be found to accomplish it.

In Boulder, that’s a reversal of the normal process, as Planning Board’s lukewarm reception showed. Some members wanted an area plan to be developed first, a yearlong process that would spell out in more detail what could be built. Members also couldn’t agree that buildings should be allowed to rise to 55 feet, the city’s charter-imposed height limit.

Council overruled them on that latter point, adding Diagonal Plaza to the list of areas exempt from Boulder’s six-year temporary ban on tall buildings, which has been extended a half-dozen times since 2015. Elected officials also seemed less willing to let pause progress and potentially lose the current proposal.

“I would prefer to have an area plan,” councilman Mark Wallach said, “but I am loath to let this opportunity pass.”

“I will miss the acres of undulating, cracked asphalt if something does go in here,” Mayor Sam Weaver joked. He was on city council when the opportunity zone was implemented, and expressed hope that other property owners would be inspired by this project and follow suit with their own redevelopments.

“We’re not building a city overnight,” he said. “We’re building it one piece at a time.”

John Volkmar, who owns the center, interior mall-style section of Diagonal Plaza, agrees. Since purchasing the property in 2015 for $4 million, nothing much has happened on the site, aside from more businesses leaving and the parking lots becoming host to numerous unhoused, car-dwelling residents.

“It looks generally to be positive,” Volkmar said of the plans. “Anything moving, any new construction over there, it’s all progress.”

A public hearingScheduled time allocated for the public to testify or share commentary/input on a particular ordinan... on the Diagonal Plaza project is scheduled for July 13, when city council returns from summer recess.