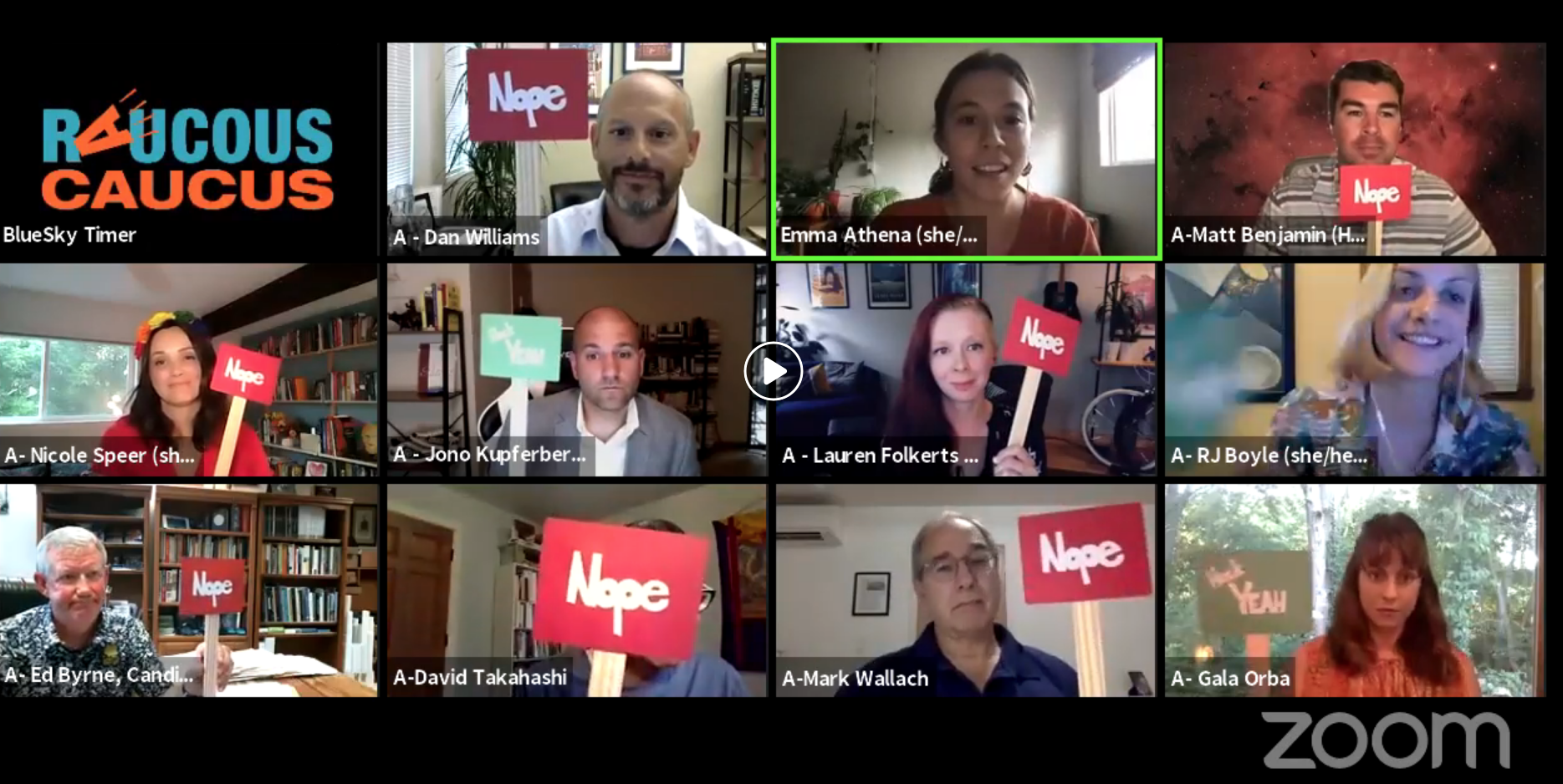 Unions are good, Black Lives Matter and local elected officials should be paid a living wage. On that much, all 10 potential candidates for Boulder city council agreed during Wednesday night’s Raucous Caucus, the first forum of the election season. As to all the rest of the important issues — including the existence of aliens — consensus has yet to be reached.

The virtual event was hosted by political group Boulder Progressives and United Campus Workers, which represents student, faculty, staff and graduate employees of the University of Colorado system. It was perhaps a slightly less raucous caucus than two years ago (though there was a Zoom bomb involving pornographic video), But the mood was light and the answers revealing.

There were many areas of near-universal agreement — perhaps not surprising, given Boulder’s homogenous politics and the leanings of host groups, though candidates of all stripes were invited to attend.

During a lightning round of quick yes/no questions, everyone indicated they would vote for the Bedrooms Are For People ballot measure except for current councilman Mark Wallach. That initiative would allow unrelated adult to live in each bedroom of a house; occupancy is currently capped at 3-4 persons, irrespective of home size.

Similarly, Wallach was the lone holdout on reallocation of police funds to other city needs, allowing tiny homes in Boulder (he didn’t answer) and support of a library district (Jono Kupferberg was ambivalent). He and David Takahashi stood alone against enthusiasm for allowing accessory dwelling units throughout the city. Takahashi was a hard no, whereas Wallach said he was a “heck maybe.”

Among the 10, there were two renters: RJ Boyle and Jono Kupferberg.

Gala Orba, who also ran in 2019, identified herself as a renter in the lightning round but clarified that she does in fact own a home outside city limits. She uses it as a vacation rental, and rents an apartment in Boulder “in order to live the lifestyle I want to live in Boulder.”

Takahashi was the sole candidate of color.

Paul Cure, who campaigned unsuccessfully in 2019, and Parks and Rec Advisory Board member Tara Winer have announced their intention to run but did not attend due to scheduling conflicts.

There may be others who are still undecided about running or who chose not to attend. Candidates have until August to officially declare, but hopefuls often identify themselves early in bids to score coveted endorsements from various political groups. Winnowing occurs throughout the summer, with “slates” often identified in the fall.

With the might and money of political machines behind them, endorsed candidates tend to perform better. All nine current city council members earned political endorsements.

All come from Boulder’s slow-growth faction, typified by backing from PLAN-Boulder, a dominant force in local politics for decades. Boulder’s political fault lines tend to fall along issues of growth and development rather than political parties. City council is a non-partisan body.

The remaining four members were all backed by The Coalition or its member groups (Boulder Progressives, Better Boulder, etc.). That means this election could tip the balance of power away from a slow-growth majority on city council for the first time since a (short-lived) switch in 2017.

Other issues have begun to eclipse the obsession with how many people live here. Boulder’s budget is commanding more attention as sales tax stagnates. Social issues have played an increasingly important role in recent years, an area where slow-growth groups have tended to struggle.

Attitudes may have shifted as well as Boulder’s housing crisis weighs heavy. In a recent survey, 70% of respondents said housing issues were very or extremely important to address, up from 53% in 2016. Affordable projects from the city’s housing authority often sail through the approval process when, just five years ago, they were subject to massive neighborhood protests and even lawsuits.

On Wednesday night, there were two other questions which elicited unanimous responses from the assembled candidates:

Is Boulder full? No.

Is Boulder’s declining population of concern to you? Yes.

Bedrooms Are For People