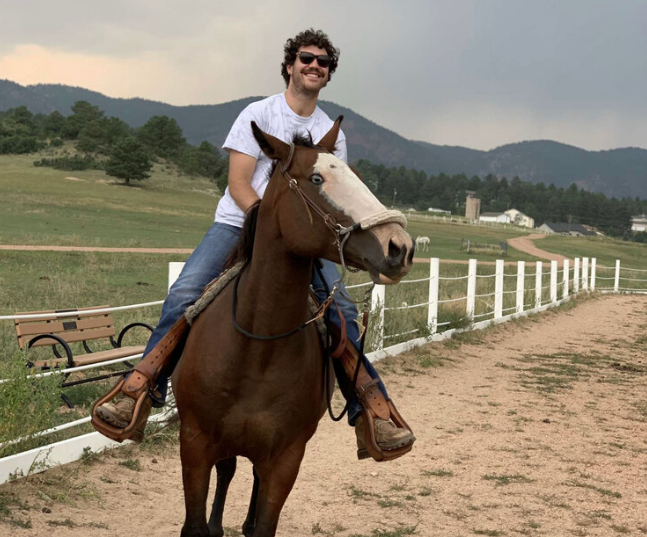 Jacques Decalo is well aware of how he sounds, thank you very much. The 25-year-old political newcomer made his first public appearance as a candidate at the Aug. 25 Boulder Chamber forum, and he answered questions about transportation, housing, the budget and more.

His platform sounded like what you might expect from a 25-year-old Tesla employee. Autonomous vehicles, cryptocurrency and hemp were all referenced. He outlined big, audacious goals like taking the city “off the grid” but stumbled when it came to more nuanced policy.

For example, Decalo — to scattered applause — said during the event that “big companies should pay their fair share” to be in Boulder. But in an interview, he admitted having no ideas for how to accomplish that, unaware that Boulder has been flirting with the idea of a head tax (leveled on employers and/or workers) for several years.

Decalo admitted his ideas might sound “radical” or “extreme” but insists they are grounded in reality. The Colorado School of Mines is testing out driverless shuttles. Miami has established its own cryptocurrency, MiamiCoin; San Francisco is reportedly considering it, and Berkeley floated the idea way back in 2018. (Cryptocurrency mining is notoriously energy intensive; Decalo would have Boulder’s powered by solar.)

As for hemp, Decalo has done his research, having studied hemp policy and sustainability in college. He also has a small side business selling hemp products like T-shirts and golf tees. Hemp is already being used to build homes in Loveland and Lyons, and there are entire companies focused on hempcrete construction.

These ideas, “they’re not revolutionary,” he said. “They’re just not mainstream.”

Climate action is the primary focus of Decalo’s platform. He speaks with the passion and urgency of a young person whose future is defined by the inactions of the past.

That goes not only for climate action but housing as well. Born and raised in Boulder, Decalo has watched his friends move away, unable to afford to keep living in the city they grew up in.

Decalo himself lives at home and pays a small amount of rent. He moved back from Washington, where he attended college, when his father was diagnosed with early-onset Alzheimer’s.

“I’m able to get by,” Decalo said. Others are not so fortunate.

Win or lose, he is hopeful that his candidacy will encourage more young people to get involved in city government and move the needle on climate action — even if he has to endure the criticism of strangers.

If elected, Decalo would be the youngest elected official in Boulder. That would add some diversity to a council where only one incumbent is under 40 years old (Junie Joseph) and provide representation for Boulder’s sizable young adult population.

Though lacking intimate knowledge of local government, Decalo is learning quickly. His proposals, while vague, show that he is at least aware of the issues Boulder is facing. He is also extremely honest about his lack of experience, takes criticism very well and is eager to listen to more experienced residents.

“I want to be held accountable,” he said. “People who have been (involved) for 20, 30 years, they’re far more knowledgeable than I am. I think working together, we can find that middle ground” between where we are now and where we need to be.

“Radical ideas are going to push us.”

Why you might not want to vote for Decalo

Decalo’s takes on city issues were vague, his proposals falling apart under the slightest scrutiny. His ideas are innovative, but he lacks any real plan to implement them. The basic reality of governance poses so many challenges as to render his best ideas impossible.

His lack of knowledge also makes him vulnerable to influence. There’s evidence of that already; Decalo did a complete 180 on the CU South annexation after being endorsed by PLAN. While evolution of thought is good and necessary, such abrupt about-faces make it difficult for voters to know how Decalo will vote. His eventual policy positions may be a result of who has access to him — which doesn’t bode well for anyone except political insiders.

Decalo sees his inexperience and newness as an asset. A council full of “deeply entrenched” politicians isn’t as innovative or flexible, he said, which is evidenced by the scant progress made on housing and the environment.

“They need someone to push them, to present these extreme ideas” and bring balance to Boulder’s governing body. “If I were running for president, it would be different. But there are nine council members. We can afford to have one radically idealistic person.”

Decalo is in favor of allowing more types of housing throughout Boulder. (More than 65% of the city’s residential land is limited to single-family homes only.) He believes in greater density as a way to meet climate goals and would like to see more sustainable building materials required.

He wants the city to continue its affordable housing efforts, with prioritization to those who live, work or “make a difference” here.

Decalo is in favor of more services and a housing-first approach. That could include spending more or removing barriers that prevent unhoused people from using what is already being offered.

“We have the resources,” he said. “It’s just about addressing the actual people and seeing what’s inhibiting” them.

He also sees trash in public spaces as a problem but would prefer to focus resources on actual cleanup than the removal of camps.

Decalo is in favor of seeking out new revenue sources, whether through the aforementioned cryptocurrency mining or taxing new products and services. He is a particular fan of so-called “sin taxes” and suggested raising the alcohol tax.

There is also room to “see where we can reallocate money with the current budget,” he said, though he wasn’t familiar enough with the budget to say what those areas might be.

Decalo’s main priorities are converting shared and public transit to electric vehicles. Autonomy could be a part of that, since it would reduce operating expenses.

City and CU buses “should be all electric,” he said. “There’s no reason at this point to be using gas buses.”

He would like to see the city “cut ties” with RTD and use the revenue Boulder currently pays into the district to beef up local bus service.

Decalo initially supported the annexation agreement and development of a southern campus, which he sees as a good opportunity for the university to build student housing.

“It’s not our sole responsibility (as a city) to house their students,” he said.

“The environmental board in Boulder wasn’t taken into consideration before this measure was passed,” he wrote. “The environmental impact from building on that plot of land is a higher risk than the reward of building.”

Decalo supports the idea of a district “purely as a resource for the community.”

“The library has helped start multiple businesses with its creative center,” he wrote in response to emailed questions. “It also provides community space.”