A version of this column ran in Boulder Weekly’s April 21 edition. It has been edited for style and to update information on recent fire activity.

Since the Marshall fire, the Boulder County area has seen more than a half-dozen wildfires, including four on Tuesday and another Wednesday. The biggest of Tuesday’s four blazes, near Gunbarrel, forced brief evacuations but did not destroy any homes. An unnamed woman will face charges in that fire.

In many, including the devastating Marshall Fire, causes are still not known. Officials made a determination Thursday that the NCAR Fire was human caused. There are no leads, though, so investigators are pausing for now until more evidence pops up.

Much of the Front Range is at extreme critical risk for wildfires on Friday, the National Weather Service warned this week, due to high temperature and winds. On Twitter and in official messaging, they pled with residents to avoid any activity that might produce sparks.

“Since 2010, this has only happened 1 other time in the Denver metro and a few times further south,” the NWS’s Twitter account posted on Thursday.

There were a couple of fires on Friday, reported by the Daily Camera‘s Mitch Byars, but they were quickly extinguished and did not spread.

Boulder City Council will talk about resilience in the face of wildfires next Tuesday. Disaster resilience is one of their priorities for 2022-2023.

Tourists, residents and workers loved Boulder’s pandemic-prompted proliferation of al fresco dining. That’s according to a survey of 836 people from earlier this year in which 95% of visitors said outdoor dining improved downtown, along with 90% of workers and residents.

Businesses were less sure, though — 78% of them still said downtown was better with outdoor dining. That’s perhaps why Council enthusiastically endorsed continuing the practice, albeit with more uniform rules around structures (no more enclosed spaces, roofs or tents, and everything has to be ADA accessible).

In a separate, West End-specific survey, 72% of restaurants and 65% of retailers said the closure had positive impacts, but just half of retail establishments and 41% of eateries surveyed wanted to keep the street closed to traffic year-round.

West End eateries have recovered more slowly than restaurants elsewhere in the city. In 2021, their revenue was 59% of pre-pandemic levels, compared to 88% citywide and 84% for downtown restaurants, according to city sales tax data.

Other factors may have contributed, like the fact that the West End has more restaurants than the East End (which has recovered and then some, posting 42% more revenue last year than in 2019). The West End also has some vacancies dragging down sales tax.

Restaurants in general lag other retail in recovery; CU-Boulder economists noted it may take until 2024 to see full revenue return. Fast-casual eateries downtown are suffering more than sit-down places, which benefit more from additional seats.

Some council members wanted more details on the performance of West End eateries before deciding whether or not to reopen the street to cars. City staff initially refrained from making a recommendation, but when pressed, offered that they would allow cars on West Pearl while exploring a “holistic, broad and intentional vision for downtown Boulder.”

“Our inclination is certainly to be more conservative,” said Cris Jones, interim director of the community vitality department.

Others on council felt West Pearl should remain closed to cars while longer-term solutions were researched.

“I suspect if we reopen, it will never close again,” said councilmember Bob Yates, noting the “huge, raging debate” over the initial creation of the Pearl Street Mall. “Let’s seize what we have.”

Current conditions will continue through at least August.

Disagreement on the library district

City and county elected officials can’t agree on how much money a to-be-formed library district can ask from voters, paving the way for a petition to place the question before voters this fall.

Mayor Aaron Brockett gave a quick update on casual negotiations with County Commissioners. They wanted the library to remain majority funded by the city of Boulder, where two-thirds of users live.

“It doesn’t look like it’s going to work out this year with the commissioners,” Brockett said. Both bodies — council and commissioners — were needed to form a district by resolution.

A district can still be formed by petition; library advocates need only 100 signatures to put something on the ballot. The measure will likely be two-fold, asking voters if they want to form a district and if they’re willing to pay for it. 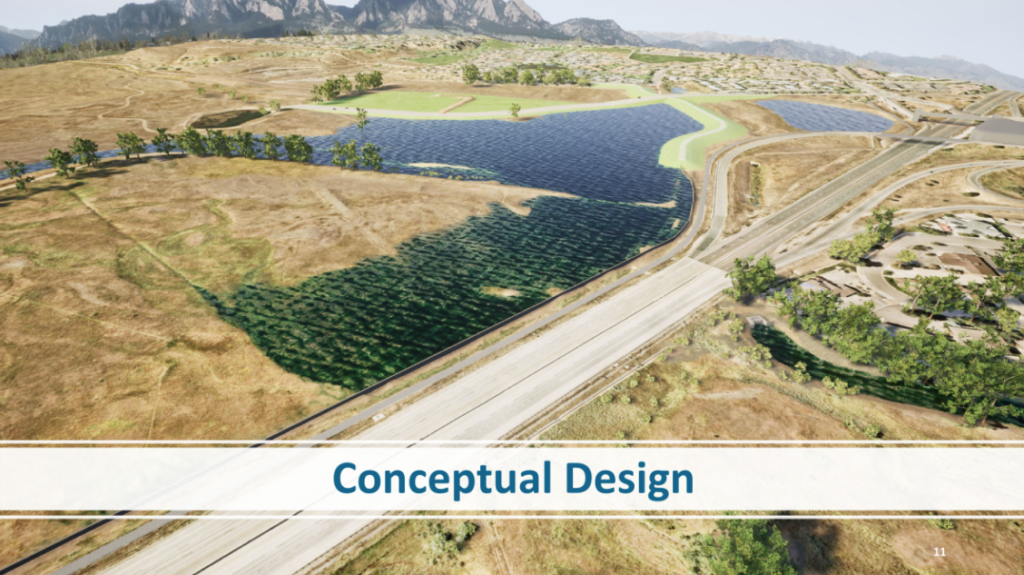 Work to save 2,300 South Boulderites from flooding is chugging along. Staff laid out a schedule for the next four years to council members. Permitting and design is happening now and should be finalized by late 2024, with construction lasting another two years.

A few big hurdles still remain. This fall, voters will have the chance to undo annexation of CU South, where the dam, detention area and floodwall will go. The university is giving Boulder the land in exchange for access to water and sewer services so it can build a southern campus.

And then there’s disposal, scheduled for 2023-2024: Open Space and Mountain Parks will need to give up a few acres so the city can build a floodwall. The formal process will require votes of the Open Space Board of Trustees and city council.

Disposal can also be subject to a vote of the people, if one is forced by petition — a likely outcome given the longstanding and organized opposition to development of CU South. Opponents have already forced two ballot questions related to the annexation.