Boulder earlier this month unveiled its $513.5 million spending plan for 2023, an 11% bigger budget than last year. In real dollars, it’s the city’s biggest budget yet, but high inflation is keeping real spending below pre-pandemic levels.

It’s also the first budget to tie spending to city values, to see whether goals are actually being supported by where Boulder puts its money.

“This year’s recommended budget is one of the most holistic the city has prepared,” City Manager Nuria Rivera-Vandermyde wrote in her budget message. “We worked intentionally across departments, often bringing leaders of diverse function areas to the tablePostponement of a motion, or a vote to discuss ways to collaborate and achieve complex, multi-departmental goals … establishing meaningful measurements that will help us determine whether projects and programs are achieving desired results.”

Those aren’t actually established yet; they’ll be developed over the next 18 month to two years.

“It will be iterative and it won’t be perfect,” said Senior Budget Manager Mark Woulf at the Sept. 8 study sessionA council meeting where members deep-dive into topics of community interest and city staff present r..., “but hopefully next year, you start to see some of those indicators alongside community goals and intended outcomes.”

Read a Twitter thread of the September 8 budget discussion

Council members did request a few changes to the recommended budget, including more spending on trash and waste in public spaces. The 2023 budget does include $1.3 million extra for extension and expansion of the city’s encampment removal program. Implemented in 2021 at a cost of $2.86 million for 18 months, the pilot has so far not resulted in a reduction in camps. Staff and city council have nonetheless supported it because of its success in keeping waterways clean, as well as a popular ambassador program in the downtown business district.

Additional spending in 2023 would pay for another encampment removal team “to keep up with demand,” as well as extra support for urban park rangers and downtown ambassadors.

“I’m not really excited about getting another encampment cleanup team for $500,000,” councilwoman Nicole Speer said. “Why are we investing almost half a million dollars in a program that has not had the success we were looking for?”

Council asked that increased enforcement be balanced with additional upstream alternatives, such as trash cans and bathrooms. City staff don’t have a firm proposal for increased spending on public spaces, Woulf said in an interview with Boulder Beat, but one will be ready by October 6, the next vote on the budget and first of two public hearings. A second public hearingScheduled time allocated for the public to testify or share commentary/input on a particular ordinan... is scheduled October 20.

Councilwoman Tara Winer noted conflicting opinions in the community about how to manage encampments in public spaces. The budget — which also includes $1.1 million two homeless-related initiatives; an alternative sentencing/diversion court program ($372,874) and operating budget for a to-be-established day center ($750,000)  — has something for everyone, she said.

“This is like a miracle budget,” Winer told city staff. “You captured all the council priorities. You also captured the community priorities. We all have different priorities, and we all think our priorities are the best priorities.”

A look at the big takeaways from this year’s budget:

How much Boulder is spending

Sales tax revenue recovered more than anticipated, leading to a larger budget. An influx of federal COVID cash helped, too, as did a change in budgeting (more on that later).

Spending is still not recovered completed from the pandemic, largely due to high inflation: 8.5% in 2022 and 5% in 2021, according to the city budget office. 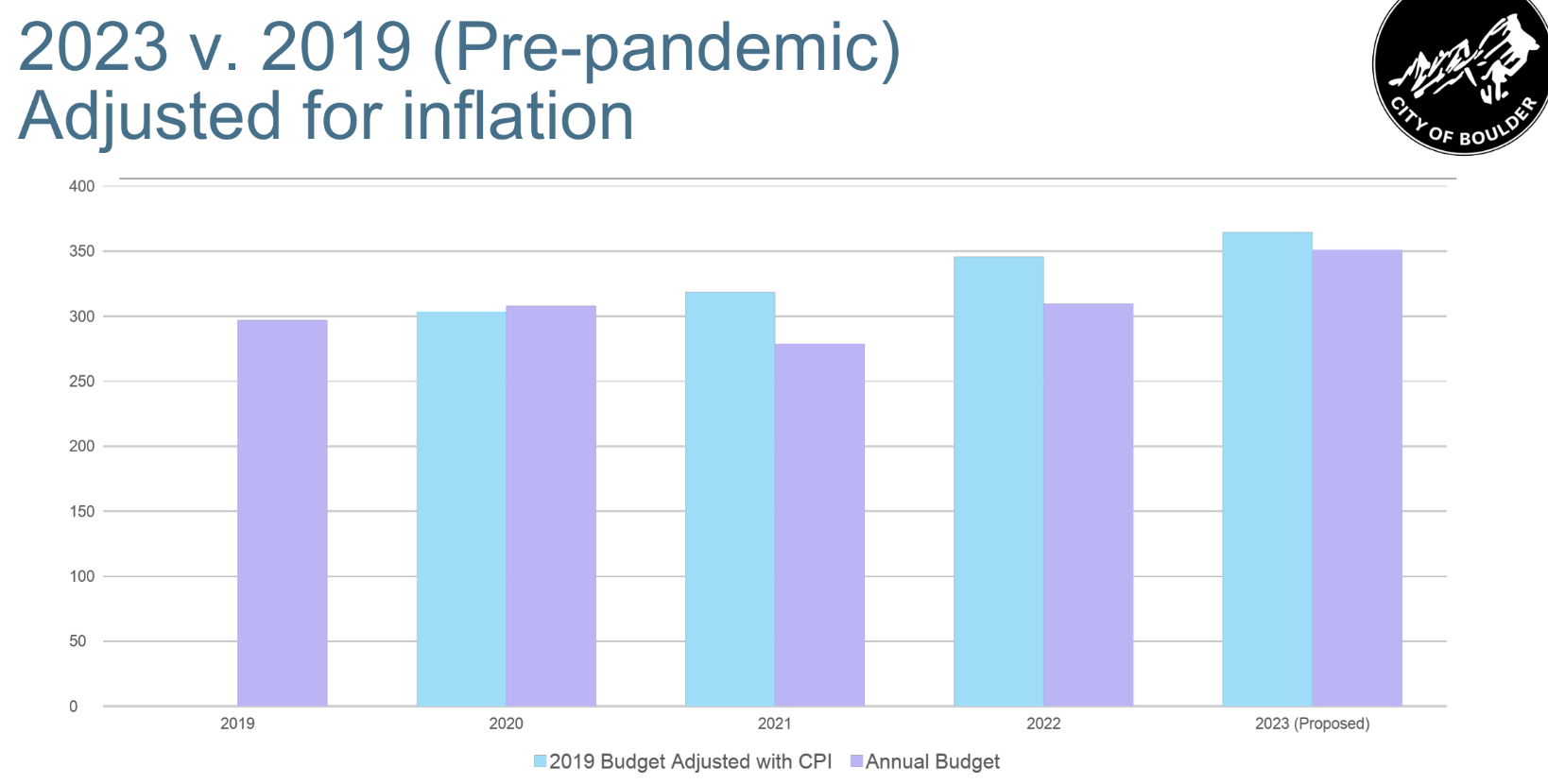 Inflation is impacting every part of the budget, from operational and staffing costs to construction projects. The cost to build a new Fire Station No. 3 — already more than $20 million over budget — has risen yet again, staff told council.

“We’re seeing inflation is there for sure,” Woulf said in an interview.

*These departments were restructured between 2019 and 2022, with transportation and facilities/fleet being broken out of public works, city clerk folded into the city manager’s office, various engagement teams being added to the communications department, and arts folded into community vitality from the library. The change in police personnel stems from moving an alternative response team under the auspices of Housing and Human Services.

Where is the money going, and where does it come from?

The city is still primarily funded by sales tax: 48.4% of city spending — which explains why such deep cuts are necessary in economic downturns.

Tracking spending by department is a good way to see where the city’s money is going, and if that changes over time. Comparisons to 2019 are not perfect; as noted, several departments have been restructured since that time. The city’s new budget software tracks department spending from 2021 onward.

When tracking Boulder’s spending, it’s best to look at the operating budget — what the city spends to keep itself running day-to-day. Capital spending is also necessary to keep the city operational, but these are big projects for physical infrastructure, and so the budget varies from year to year.

Of Boulder’s operating budget, 55% is dedicated funding: That is, money voters OK’d for specific uses. Some departments are majority (transportation) or entirely (open space) funded by dedicated revenue.

Many departments, including those crucial to daily operations, are primarily paid for out of the general fund. The 2023 general fund is $187,985,127, or 45% of the city’s budget, a 14% increase from 2022. The general fund is another good way to track where Boulder’s money goes, since the rest is legally mandated to be spent on certain things.

Actually, a lot. The 2023 budget details $18.8 million in “budget enhancements” (read: new spending) across many programs and priority areas. Among the highlights are:

2023 budget enhancements were actually over $33 million, but nearly half of that was due to change in the way Boulder plans its Housing and Human Services spending.

In the past, money from development fees was added into the budget after they were paid, months after the base budget is approved. But such projects take years to plan and complete, so the city typically knows what money is coming in before it actually gets it. This was the first year those anticipated funds were accounted for in the initial budget.

The other significant change was in planning for additional revenue above and beyond what was budgeted for, referred to as fund balance after reserve (because it’s what’s left over after money is put into a backup, emergency reserve). This has always somewhat been “money to play with,” as Woulf put it — in past years, council used it to restore proposed cuts to the library or beef up arts spending.

This year, though, staff used most of that money ($22 million) to fund unpaid for council priorities, projects and pilot programs, including some of those mentioned above.

“There’s not a bucket of money ready to be allocated somewhere” at council’s discretion, Woulf said. While “the previous approach was to leave some amount, we’re programming those dollars for 2023,” part of the new commitment to align city spending with stated values. It’s a “step forward toward having a more outcome-based, goal-oriented budget.”

Boulder’s spending plan lays out, for the first time, the dollars behind each of the city’s 7 stated “goal areas”: Livable, Safe, Healthy & Socially Thriving, Accessible & Connected, Environmentally Sustainable, Responsibly Governed, and Economically Vital. Each has its own landing page on the city budget site, detailing what departments and programs the money goes to, with graphs to compare ongoing expenses and recommended additions.

The city has been trying in recent years to rein in last-minute budget additions, as sales tax revenue grows more slowly amid an aging and shrinking population. (Collection of sales tax from online sales has tempered the simmering crisis a bit.) That has at times created tension between elected officials eager to implement their vision and the reality of hundreds of million of dollars in unfunded future projects.

If sales tax projections are correct, or if sales tax continues to outpace projections as it has for most of the pandemic, there will be extra money for council to allocate in the first adjustment to the budget next year, Woulf said.

“This just changes when and how.” 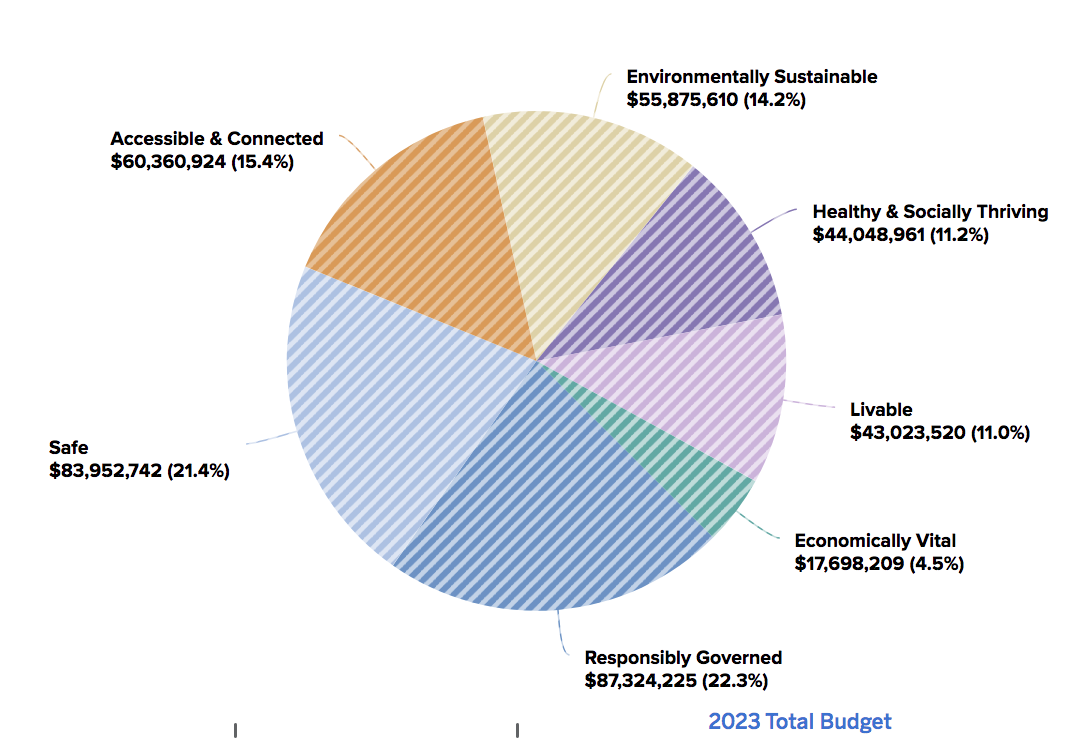