A depleted city council — three councilmen were absent from this week’s meeting, including two of the most pro-police members — said Boulder PD’s plan to reimagine policing didn’t go far enough toward actual reform, citing a lack of feedback from groups historically targeted by police and the plan’s focus on hiring and additional spending. One councilwoman has requested a panel of civil rights experts to weigh in on the plan.

Police Chief Maris Herold is asking for 14 extra patrol officers over the next five years, plus eight sergeants and lieutenants and $5.6 million in new spending. More cops are necessary to combat rising crime, Herold argues — violent and property crimes have increased 40% and 60%, respectively, since 2013, the last time the police department updated its planning documents.

Thursday’s discussion was just the first of a long and likely controversial process as crime and policing have become divisive issues in Boulder. Budget requests will be vetted when those talks begin in September; city council is scheduled to approve the police plan in December.

To repair trust, ‘we have to go above and beyond’

“Reimagining Policing” is not a local effort but a national one, pushed by the Obama Foundation. It calls for police departments to review and reform “use-of-force policies and/or ways to redefine public safety and combat systemic racism within law enforcement.”

BPD’s answer to that challenge has been a months-long process that began soon after Chief Herold was hired. In 2020, Herold reformed force and firearm policies and implemented de-escalation training; use-of-force by officers declined by 17% following the changes.

External pressure forced other reforms, like the hiring of an independent monitor and the creation of a new civilian oversight panel after the highly publicized confrontation of a Black student from Naropa. That group just released its first report on officer complaints. They allege that an officer used improper force to restrain a 14-year-old suspect. According to Boulder Reporting Lab, their recommended disciplinary action was ignored by Chief Herold, and the officer was cleared of wrongdoing.

The report also revealed that Black residents account for 10% of complaints against cops, despite being 1% of Boulder’s population.

BPD’s plan calls for an analysis of racial, ethnic and gender bias in police stops, arrests and uses of force. Multiple past reports have found that Black and Latinx residents are more likely to be stopped, ticketed and arrested — a fact some on council lamented was not acknowledged by police.

“Can we just be open about that in our discussion?” asked councilwoman Nicole Speer. “How do we showcase where we are, the same way you’re showcasing crime?”

One of the plan’s focus area’s is “Serving as a Trusted Partner in Racial Equity (and) Support for Vulnerable Populations,” which includes vague mandates for “partnership/communication with communities/organizations representing historically excluded populations to improve access (and) communication with the department and its services.”

Such groups were consulted in drafting the plan itself: Staff worked with community connectors, Boulder Housing Partners, the local NAACP branch, Mayamotion, Growing Up Boulder, the National Alliance for Mental Health, Families of Color Colorado, Showing up for Racial Justice, Boulder Shelter for the Homeless and Feet Forward, according to project manager Wendy Schwartz.

Read a thread from Thursday’s discussion

Council members said it wasn’t clear what role these groups played, or how their feedback was incorporated.

“I really would like to see a much stronger commitment and set of actions and efforts with regards to how we engage communities of color and those that are disproportionately impacted by law enforcement,” said councilman Matt Benjamin. “We have to go above and beyond in gaining and building back the trust in those communities.”

Speer asked that a civil-rights panel be invited to weigh in on the plan. “We have experts in policing that have been involved in this process,” she said, “but a lot of the reform is coming from the civil rights experts.”

Who to listen to in matters of crime and policing has divided Boulder as much as the rest of the nation. Crime was a central focus of the 2021 local elections. Open commentDedicated time at the beginning of regular council meetings, where up to 20 members of the public ca... at council meetings is sometimes stacked with speakers imploring Boulder to get tough on crime; at others, dozens deplore the continued criminalization of poverty and homelessness.

Proponents of increased policing are echoing Chief Herold, who has continuously and consistently said Boulder needs more cops on the street not only to fight increased crime, but to prevent it. Herold is a proponent of “proactive” policing — discretionary stops and other encounters initiated by police, rather than phoned in by residents — speaking on it at nearly every appearance before council.

“The heart of the plan” is stratified policing, Herold said Thursday, a model with crime prevention at its center.

A staffing analysis, commissioned separately from but referenced in the police plan, details a drop in proactive police encounters between 2013 and 2020. Cops responded to 21.4% fewer incidents overall, but a great share of violent and property crimes, which take more time and require more officers to respond (leaving less time for proactive work).

Certain types of crime have increased significantly in Boulder and the nation since 2013. 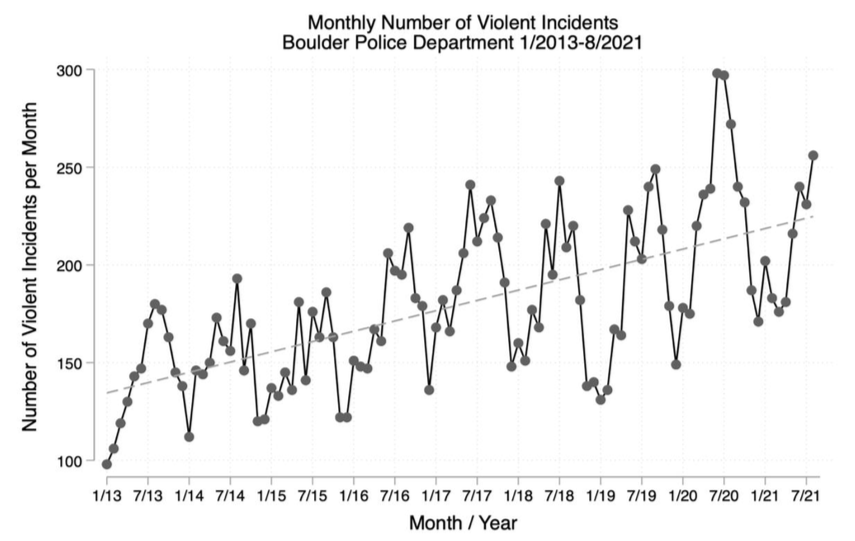 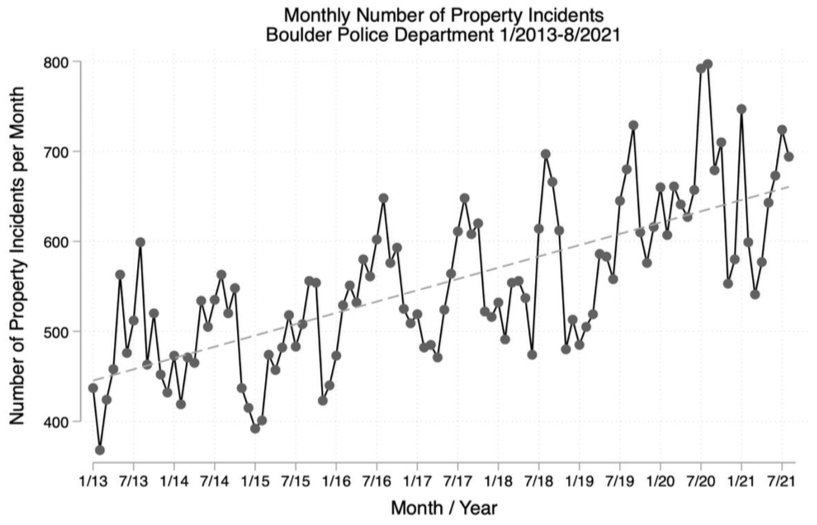 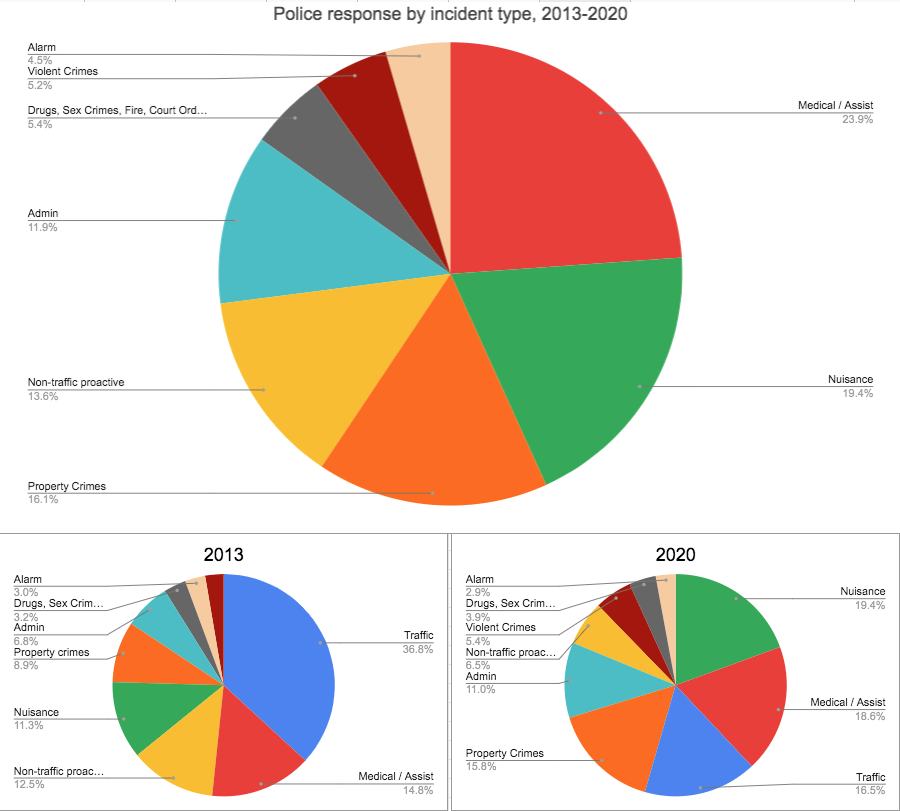 Note: Drugs, Sex Crimes, Court Orders, Fire and Other responses have been combined in the above charts due to their low prevalence relative to other incidents

The staffing analysis recommending hiring 8-14 new officers to staff evening and overnight shifts, when more crime tends to occur. BPD’s plan asks for the full 14 officers over the next five years, plus two sergeants and six lieutenants, for a total cost of $4.4 million (that figure includes costs for vehicles and equipment). Department leaders said 30 officers will need to be hired during that time to fill current vacancies and projected turnover.

Council pushed back on the lack of options presented. Department plans typically lay out three different funding scenarios for maintaining current service, service expansion and a “vision” in which all department goals are achieved. Critics have questioned including a vision-level plan, as departments are never funded at those amounts.

All departments are faced with revenue challenges, councilwoman Lauren Folkerts said. “Generally, we’re not able to fund plans at the full vision in our city.”

Boulder’s own record on cops and crime is mixed (though it has not been studied as rigorously as national reports). Monthly patrol data, obtained via a legal settlement, shows no correlation between the number of officers and the amount of crime. And crime rose between 2013 and 2022 even as the number of patrol officers increased 10%; though, again, multiple factors contribute to crime.

Read: Crime is up in Boulder. But it’s complicated. Boulder Beat

Reformers have argued that cops should be doing less, shifting the responsibility for mental health crisis, homelessness and other non-emergent incidents to professionals in those fields. Boulder has yet to implement truly alternative response like Denver’s successful STAR program; Boulder police currently co-respond on mental health emergencies.

The Reimagining Policing plan did acknowledge that cops can’t do it all, while also rejecting calls to reallocate funding.

“Staff reviewed the concept of reallocation and is not recommending that option in the Boulder Police Department Reimagine Policing,” they wrote in notes to council, “though the city certainly supports and is working on non-police intervention strategies.”

On Thursday, council questioned whether the plan — and the police — were truly committed to reform.

“I just wonder if we’ve gone broadly enough on reimagining,” councilwoman Rachel Friend said. “I’m not naive; I don’t think societies can exist without criminal justice systems. But if we are reimagining, have we taken it down to the studs far enough so that it is most beneficial for the people doing the work and the community?”

Folkerts, noting the unlikelihood of a fully-funded plan, said “knowing what (parts) the community is most excited about” would help council decide what to fund. The first discussion on the 2023 budget is scheduled for September 8.

A final public engagement window on the draft plan is starting soon. Opportunities for feedback will be posted at the Reimagining Policing project page or Be Heard Boulder.