Looking for more? Click on each ballot title for a full exploration of pros, cons and necessary information, or visit VoteBoulder.co

For a collection of op-eds on ballot items, check out BBOP’s Opinionated Guide to (Local) Elections 2022

1A: Countywide wildfire mitigation sales and use tax and revenue change
Should Boulder County pass a new sales tax to pay for wildfire prevention?

1B: Emergency services sales and use tax and revenue change
Should Boulder County pass a new sales tax to pay for ambulance, fire and search-and-rescue?

Things to consider:
– This is not a tax increase; you’re already paying it
– The transportation tax makes up a quarter of the county’s transportation budget and is the only source for anything above and beyond routine maintenance of existing facilities — transit, bike and pedestrian infrastructure, new roads or bridges; all that is paid for with this tax
– Would extend this tax in perpetuity

2A, 2B: Climate tax and bonds (TABOR)
Should Boulder combine two taxes into one (higher) tax to pay for climate initiatives?

How much would taxes go up?
It depends on how much electricity and natural gas you use, but the city estimates the following average rates:

2C: Repeal of Library Commission and Tax if Library District Created
If the library district is approved by voters, should Boulder remove references to the library in its charter?

Things to consider:
– Would only matter if library district (6C) is passed
– Would avoid unnecessary conflicts and confusion in the charter

Things to consider:
– Ensures election results are certified before council takes office
– Mayor has no more power than other city council members
– Avoids situation where someone wins mayoral and council seat (no rules in place for that currently)
– Keeps experienced members on council if they don’t win mayoral race

Brief recap of CU South annexation:
OK’d by city council in 2021, the University of Colorado added 308 acres into city limits with plans to build a southern campus. In exchange, Boulder gets donated open space and land for flood control (dam, detention, floodwall).

6C: Boulder Public Library District and mill levy
Should a library district be established and paid for by a new property tax?

How much are taxes going up?
You can find an estimate for your property using this tool: https://experience.arcgis.com/experience/8f0fafc66c7f4d0e9aba1084e37de9b7

Things to consider:
– Library branches still operating with reduced hours, staff and programming
– No money in city budget for additional branches in Gunbarrel, Niwot
– Will free up ~$10 million in sales tax funds for the city
– Voters will likely have less say on where those freed-up funds go (city leaders do not have to OK spending with voters, as money is already coming in)
– Library is not the only city department that is underfunded or with stagnant spending
– Large tax increase, particularly for businesses

Things to consider
– A new judicial district (23rd = Douglas, Elbert and Lincoln counties) was created in 2020, but state law doesn’t specify how to appoint judges for it
– This would move seven judges from the 18th District (where the above counties used to be) to the 23rd
– Judges will be subject to regular retention elections and all other laws and procedures
– Some critics have said this one-time workaround amounts to a “special interest” providing job security to the judges

Amendment E: Extend homestead exemption to Gold Star spouses
Should property tax breaks be given to the widows and widowers of fallen military members?

Things to consider:
– Gold Star spouses are those whose spouse died in the line of duty or due to service-related illness or injury
– About 490 Gold Star spouses would be eligible
– The Homestead Exemption exempts half the first $200,000 of a home’s value from property tax, $480 to $630 per year on average
– This would cost the state roughly $288,000 per year
– Amendments require 55% of the vote to pass

Things to consider:
– A 1958 law requires a license to run charity raffles or BINGO games “with significant prizes” — as Colorado Sun wrote, everything from “the 50/50 raffles at Colorado Rockies games to bingo at the Elks Lodge”
– Licenses are required to operate charity games; they can be applied for after a nonprofit has been in existence for 5 years
– This amendment would change the waiting period for a license to 3 years
– Nonprofits (churches and such) currently rely on volunteers to staff charity games or hire outside firms, as they are barred from being paid for such activities from state law
– This would allow nonprofit employees to be paid for running charity games

Prop FF: Healthy school meals for all
Should free school meals be funded by reducing a tax break for Coloradans earning over $300,000 per year?

Things to consider:
– The measure would be applied only to individuals earning over $300,000 per year (federal adjusted gross income) about 5% of all Coloradans
– Per Colorado Sun, “Currently, taxpayers who earn more than $400,000 can claim a maximum of $60,000 in state income tax deductions for a joint filer and a maximum of $30,000 for a single filer”
– A federal program providing free school meals during the pandemic has ended
– This would not be an additional tax; rather, it will reduce the amount of tax breaks people earning over $300,000 can claim
– Free breakfasts and lunches would be available to all students, without income verification or qualifications

Prop GG: Add tax information table to petitions and ballots
Should proposed changes to income tax also specify how much different income groups will pay or save?

Things to consider:
– This would add the tax table included in blue books to the ballot and petitions
– Tax tables show how tax measures would impact 8 different levels of income (for instance, if it’s a tax break, it will show how much taxpayers earning $50,000 would save versus how much those earning $400,00 would save, etc.) Ditto for increases.
See an example of this below, in the next proposition

Things to consider:
– This would apply to individual and corporate income taxes
– The state income tax rate was decreased in 2020 from 4.63% to the current 4.55%
– This would reduce the state budget by $412.6 million in 2023-2024
– Higher-income earners will save more, because of Colorado’s flat income tax rate (everyone pays the same rate; it doesn’t adjust as incomes increase)
– 75% of Coloradans would receive a tax break of $63 per year or less 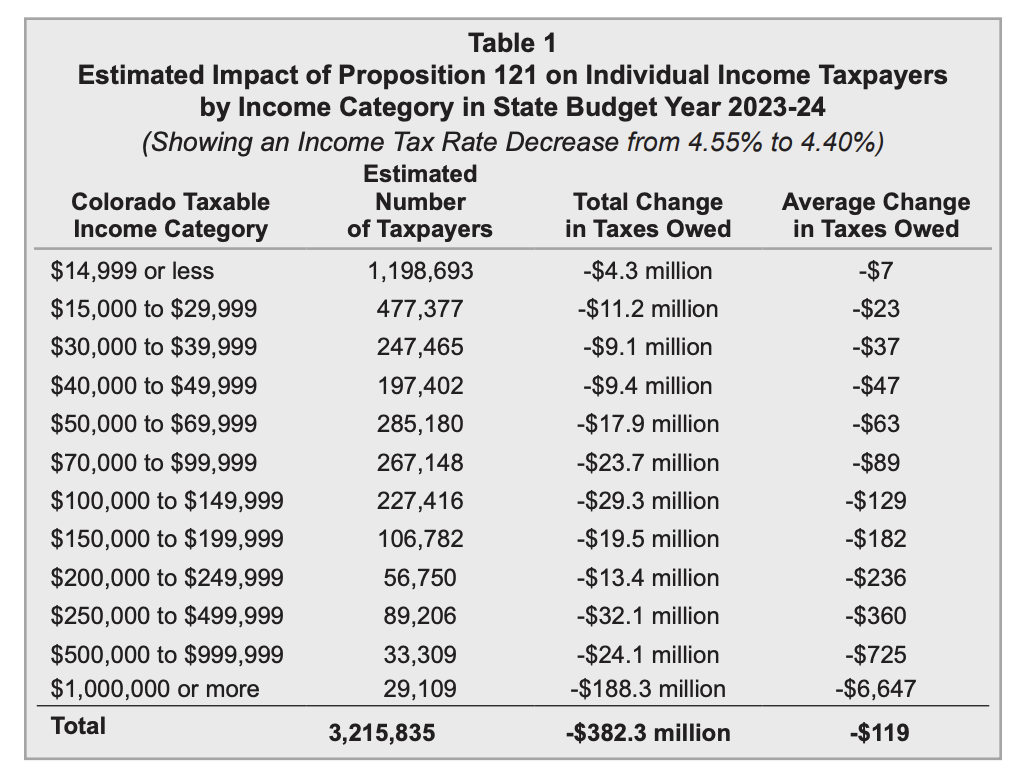 Prop 122: Access to natural psychedelic substances
Should “magic mushrooms” (and more) be legalized?

Things to consider:
– Mushrooms are decriminalized in Denver, not legalized
– This would legalize them statewide and create licensed facilities where they could be consumed
– It does not allow retail sales
– Starting in 2026, licensed facilities could add ibogaine, mescaline, and dimethyltryptamine, or DMT
– Mental health and substance abuse centers could also become licensed to use these in treatment (psychedelics are currently being studied/used to treat substance abuse and other behavioral health conditions)
– This would allow Coloradans to grow their own mushrooms (but not sell them)

Things to consider:
– This is not a tax increase; it’s a carve-out of the existing budget
– It would cost roughly $145 million in the current fiscal year and $290 million in 2023-2024
– Per Colorado Sun: “??The measure would give grants and loans to local governments and nonprofits to acquire and preserve land for affordable housing development … provide down payment assistance for first-time homebuyers” and rental assistance and eviction defense.
Local governments must increase affordable housing by 3% each year to qualify for matching funds and create a fast-track approval process for affordable housing
– Local governments who don’t meet these requirements would be ineligible for matching funding for a period of time
– State funding must be in addition to existing spending, not replace it
– Expected to reduce TABOR payments to Colorado taxpayers by $43 in 2023 and $86 in 2024

Prop 124: Increase allowable liquor store locations
Should liquor retailers be allowed to open an unlimited number of stores, starting in 2037?

Things to consider:
– Grocery stores can sell beer but not wine; this would allow wine sales beginning March 1, 20223
– Grocery stores with pharmacies can begin selling wine and spirits in 2027
– There was no major change in the number of liquor stores after grocery stores started selling full-strength beer in 2019
– Grocery store chains Albertsons Safeway, Kroger/King Soopers and Whole Foods are also supporting this campaign and have contributed financially to it

Things to consider:
– Current COVID-era rules allowing to-go alcohol sales end in July 2025
– This measure would extend those indefinitely and allow third-party companies (Uber, DoorDash and the like) to deliver alcohol as well (currently, establishments must use their own staff for to-go alcohol orders)
– Per Colorado Sun: “Restaurants and bars would still be allowed to sell only two bottles of wine, 12 cans of beer and 1 liter of spirits per delivery or takeout order”
– Delivery companies must obtain a license to deliver alcohol and follow current laws (no sales to minors, etc.)
– Some have argued that enforcement for underage sales will be difficult and that large companies using “contract” labor (Instacart, DoorDash, etc.) may escape liability
– Grocery store chains Albertsons Safeway, Kroger/King Soopers and Whole Foods are also supporting this campaign and have contributed financially to it, as have Instacart and DoorDash